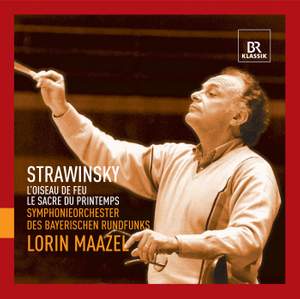 Single release of the 60th anniversary-box

Unlike some recordings originally destined for radio broadcast, the sound here is very good indeed. There is clarity and a naturalness (for CD) that conveys both the breadth of the orchestral... — BBC Music Magazine, March 2011, More…

IV. Ronde des Princesses (Round of the Princesses)

Part I: Adoration of the Earth

Under Lorin Maazel, who held the Chief Conductor position from 1993 to 2002, the Symphonieorchester des Bayerischen Rundfunks reached a new level of performance culture, precision and flexibility. Like no other conductor, Maazel is capable of masterfully handling large-dimensioned works and performing music tightly packed with emotional content clear-headedly to make its effect even greater. The works on this CD mark two key moments in Stravinsky’s development as a composer during the period before the First World War.

The ballet music for L’oiseau de feu (The Firebird) contains many of the attributes that had made the Sacre such a scandalous avant-garde event in the Paris of 1913: unprecedented sound colours, rapidly changing rhythms, orgiastic climaxes and an exotic subject matter. Lorin Maazel and the Symphonieorchester des Bayerischen Rundfunks – a dream combination for Stravinsky’s sensuous and rhythmically irresistible ballet works.

Individual release from the successful anniversary box of the Symphonieorchester des Bayerischen Rundfunks.

Highly virtuosic orchestral works in which Maazel’s conducting expertise comes most impressively to the fore.

Unlike some recordings originally destined for radio broadcast, the sound here is very good indeed. There is clarity and a naturalness (for CD) that conveys both the breadth of the orchestral palette and a sense of occasion. The delicacy of the hushed textures in the opening of Part 2 is magical, and a fitting tribute to the best of Lorin Maazel's work with the orchestra.