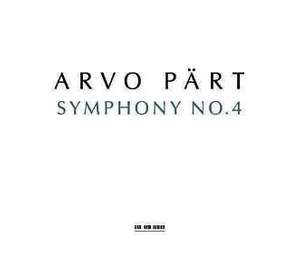 Like much of Pärt's other works, it weaves the effect of musical suspension in time, helped by motivic and stylistic similarities across its three movements...The Estonian Philharmonic Choir... — Charlotte Gardner, bbc.co.uk, 24th August 2010 More…

Arvo Pärt returns to symphonic structure and scope, in a new work scored for string orchestra, harp, tympani and percussion: the Symphony No. 4 ‘Los Angeles’. Almost 40 years after his Third Symphony, the Estonian composer wrote his Fourth for the Los Angeles Philharmonic Orchestra and Esa-Pekka Salonen – and ECM releases their premiere performance, recorded live in January 2009, to celebrate Pärt’s 75th birthday (on 11 September).

This is the first symphonic work Pärt has written since developing his “tintinnabulation” style. A composition in three movements, it opens with characteristically shimmering suspended chords, and an extraordinary journey begins. “The symphony is large,” wrote Mark Swed in the Los Angeles Times, “and exceedingly beautiful.”

The Fourth Symphony is both literally and figuratively a 'musical setting', based on an underlying text. Canon of the Guardian Angel forms the work’s point of departure, determining its structure down to the smallest details. It was recorded live at LA’s Walt Disney Concert Hall. The 37-minute work is augmented on disc by a new montage of “fragments” of Kanon Pokajanen, a piece which Pärt feels is closely related to the symphony. “To my mind, the two works belong together and form a stylistic unity.”

A second birthday celebration from ECM will be the release on 13 September of a special deluxe version of Tabula rasa (4763879), Arvo Pärt’s international breakthrough album in 1984. This book/CD edition will include study scores of all four pieces on the disc, previously unreleased facsimile manuscripts, liner notes, an introductory essay by Paul Griffiths and exclusive photographs.

Like much of Pärt's other works, it weaves the effect of musical suspension in time, helped by motivic and stylistic similarities across its three movements...The Estonian Philharmonic Choir are just as effective in the Kanon Pokajanen fragments...delivered in a crisply enunciated, religiously-weighted performance.

Salonen gradually steers the soundworld from Hollywood underscoring towards the monasteries of Orthodox Russia, evoking desolate landscapes and, in the final movement, a sense of ritual deliverance from destruction.

There has probably never been a symphony like this...Repeated listening brings great rewards: this is a true symphony for the 21st century.

...the work, cast in three incantatory movements and scored for strings, harp, timpani and percussion, is as deep as anything Pärt has written.

Almost 40 years on from his third symphony, Arvo Pärt returned to the form with this "Los Angeles" symphony...Scored for string orchestra, harp, tympani and percussion, it opens imperceptibly in a quiet shimmer of strings before developing in stirring but sombre manner, the waves of rising string flourishes peaking like straining voices

The mood ranges from serenity, ritual, repetition and non-vocal "chant" to dignified, meditative grandeur...Fragments from Kanon Pokajanen...is delivered with addictive Slavonic passion...In all senses, this latest ECM-Pärt collaboration is entrancing.