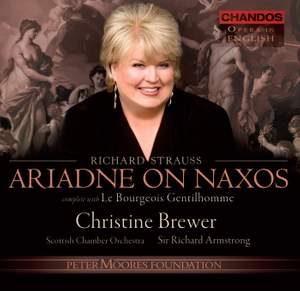 Brewer's luscious Ariadne had to be captured on disc...There's another essential performance from Alice Coote...with unflinchingly full top notes that few other genuine mezzos possess...I've... — BBC Music Magazine, December 2010, 5 out of 5 stars More…

The Prologue: I can show them the secrets of the universe (Composer, Music Master)

The Prologue: She takes him for the God of Death (Composer, Zerbinetta)

The Prologue: A moment means nothing (Zerbinetta, Composer)

The Opera: There is a land, a world untainted (Ariadne)

The Opera: The moment I think I'm true to one lover (Zerbinetta)

The Opera: Me? Can you be sure? (Bacchus, Ariadne)

The Opera: Shall we not pass over? (Ariadne, Bacchus, Naiad, Dryad, Echo, Zerbinetta)

Appearances in opera, concert, and recital by the Grammy Award winning American soprano Christine Brewer are marked by her unique timbre, at once warm and brilliant, combined with a vibrant personality and emotional honesty reminiscent of the great sopranos of the past. Her range, golden tone, boundless power, and control make her a favourite of the stage as well as a sought-after recording artist.

On the opera stage, she has made a speciality of the late romantic repertoire and of Richard Strauss in particular. The title role in Strauss’s Ariadne auf Naxos is one of her most famous roles, even her ‘signature’ role, and she has taken her striking portrayal of it to The Metropolitan Opera (her debut, in 2003), Opéra de Lyon, Châtelet Théâtre musical de Paris, Santa Fe Opera, English National Opera, and Opera Theater of St Louis.

Sir Richard Armstrong has long been regarded as one of the UK’s leading opera conductors, who has made a speciality of performing works from the late romantic era and the twentieth-century repertoire.

First performed in 1912, Ariadne auf Naxos was Strauss’s first chamber opera, written consciously in emulation of classical style. In the prologue, singers and dancers hired to entertain a rich man’s guests are told that they have to combine their performances so that the evening’s firework display will not be delayed. This prologue introduces the ‘composer’ of Ariadne, one of the great comic roles in a Strauss opera, as well as the overweening Major-Domo, overseeing proceedings, played to perfection in this recording by Stephen Fry. The opera which follows is the story of Ariadne, who is heart-broken that her lover, Theseus, has abandoned her, and Bacchus who consoles her. It is music of great yearning beauty and genuine depth; indeed, the role of Ariadne is one of the great soprano roles in opera.

This is the first time that Christine Brewer has recorded her superb interpretation of the part in a complete recording of the opera, and the first time that this opera has been recorded sung in English. With an all-star cast, the recording is a major addition to the Chandos Opera in English catalogue. As a bonus, the orchestral suite from Le Bourgeois Gentilhomme, Op. 60, is also included. The music was written for a play to be performed before the opera Ariadne auf Naxos, but it was felt that the play, followed by an opera would make for too long an evening. Strauss later wrote a new prologue for the opera (the one we are now used to) and arranged this suite from the incidental music to the play. It shows Strauss at his most delightful – the eighteenth-century flavour reflected in the fact that Strauss based Nos 5 – 7 on airs by Jean-Baptiste Lully who had provided the music for Molière’s original play.

Brewer's luscious Ariadne had to be captured on disc...There's another essential performance from Alice Coote...with unflinchingly full top notes that few other genuine mezzos possess...I've never heard a more responsive trio of nymphs or a better male quartet

...it could hardly be sung with more spirit or fun. Stephen Fry is delightful in the short spoken role of the Major Domo...Brewer makes a glorious Ariadne and tenor Robert Dean Smith impresses with his unforced, shining account of the cruelly demanding role of Bacchus.

The dialogue crackles and there’s a palpable sense of drama, notably when Alice Coote, a Composer of poise and ardour, is centre-stage...The recording’s value lies in preserving Christine Brewer’s Ariadne – warm, majestic and humane, rising to radiant heights in the finale with Robert Dean Smith’s Bacchus.

The standard here is remarkably and consistently high...it is a treat to hear the young and (as yet) by no means starry Zerbinetta bringing an almost nonchalant assurance to the technical difficulties...The Prologue is enriched by Stephen Fry's Major-Domo, imperturbable beyond the raising of a supercilious eyebrow.

Christine Brewer’s Ariadne boasts a gleaming, sumptuous dramatic soprano, capable of vulnerability and tenderness. Zerbinetta’s stratospheric writing and coloratura hold no terrors for Gillian Keith, while Alice Coote’s Composer ranks with the best on disc. Indeed, the cast has no weak links, and Richard Armstrong and the SCO set the seal on the recording’s success.

the real vocal honours belong to Alice Coote's exquisitely troubled Composer and Gillian Keith's vulnerable Zerbinetta – while Robert Dean Smith is a fine Bacchus. The real hero, though, is conductor Richard Armstrong, whose understanding of the work's tricky dividing line between irony and genuine emotion is outstanding.

Richard Strauss in English? Yes, when the cast is as smart and committed as this...Hofmannsthal's fine but word-rich libretto is clear and audible in Christopher Cowell's translation...Sir Richard Armstrong conducts a voluptuous but brisk performance, with sinewy playing from the Scottish Chamber Orchestra

Few singers can beat [Brewer] for matching a full vocal bloom to vivid dramatic gifts. Close your eyes and you easily see both her characters. The Prologue’s backstage artisans squabble vigorously, with Alice Coote in ringing good form as the tormented composer...Delightful, tuneful and always understandable, this set represents another victory for Chandos’s Opera in English series.