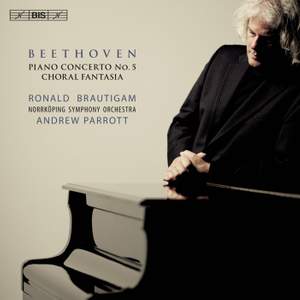 The opening of the concerto is excellent: Parrott gets appropriately spacious playing from the orchestra, while the bell-like tone of Brautigam's instrument - a Steinway Model D - helps to prevent... — Classic FM Magazine, January 2011, 4 out of 5 stars More…

For the final instalment of his survey of Beethoven’s works for piano and orchestra, Ronald Brautigam has saved ‘the final crowning glory of his concerto output’, as Beethoven specialist Barry Cooper describes the Fifth Piano Concerto in his liner notes. It is coupled on this disc with the Choral Fantasia – an intriguing work scored for piano, orchestra and chorus with vocal soloists.

he individual discs in Ronald Brautigam’s series have received numerous distinctions, including a MIDEM Classical Award in 2010, and his performances have been weighed against classic recordings by legendary pianists. Ronald Brautigam, the Norrköping Symphony Orchestra and Andrew Parrott are in their usual top form, with the brief but crucial appearance of the eminent Eric Ericson Chamber Choir in the Choral Fantasia.

The opening of the concerto is excellent: Parrott gets appropriately spacious playing from the orchestra, while the bell-like tone of Brautigam's instrument - a Steinway Model D - helps to prevent the music from sounding too bombastic...[in the Fantasia] Brautigam could almost be Beethoven himself improvising.

Notes pour and sparkle from Brautigam's fingers like diamonds...clearly Bruatigam has chosen his instrument to reflect his love of clarity, lightness and speed

Cutting through any deadening deference, here’s an endearing spring clean to give these classics a new bounce and vigour...Two centuries of gilt are scraped off and the gain in dynamism is immense.