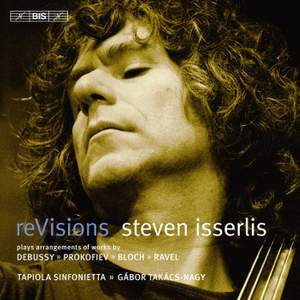 Isserlis finds wonderful, darkly smouldering tone and line for Ravel's Two Melodies (originally for soprano voice) and the three Ernest Bloch pieces. He excels, too, in the busier idiom of Prokofiev's... — Classic FM Magazine, November 2010, 4 out of 5 stars More…

Beamish: Suite for Cello and Orchestra (after C. Debussy)

Steven Isserlis has earned a reputation as one of the foremost cellists of our day. At the same time he has become known for his ingenuity and innovation in programming, something which this disc is the perfect example of. It combines four works for cello and orchestra all arranged at his personal request, and each of them by the arranger of his choice.

The most radical reworking is the opening piece, an arrangement based on the fact that Debussy at the age of 19 composed a Suite for cello and orchestra. All that is known for certain about this suite is that its fourth movement was called Intermezzo, and that this piece has survived in a version for cello and piano. In her imaginative reconstruction of – or rather replacement for – Debussy’s original composition, Sally Beamish has used this piece as the opening movement, going on to construct orchestral arrangements of four other Debussy works from the same period, including the piano pieces Rêverie and Danse bohémienne. The two Ravel songs which follow were arranged by Isserlis’ friend, the violinist Richard Tognetti, in order to supplement the concert programme for a tour that the two were to make with Tognetti’s own Australian Chamber Orchestra. Vladimir Blok’s orchestration of Prokofiev’s Concertino, which had been left incomplete at the death of the composer, was made as Isserlis was unhappy with the existing arrangement of the work, made by Kabalevsky. The disc closes with the earliest of these four re-visions, film composer Christopher Palmer’s orchestration of Ernest Bloch’s From Jewish Life. Throughout the programme Isserlis receives the expert support of Tapiola Sinfonietta and Gábor Takács-Nagy.

Isserlis finds wonderful, darkly smouldering tone and line for Ravel's Two Melodies (originally for soprano voice) and the three Ernest Bloch pieces. He excels, too, in the busier idiom of Prokofiev's three-movement Concertino

Beamish's realisation - or re-imagining - of a putative Debussy suite is a delight. This is, in a sense, Debussy before he became Debussy...Beamish's orchestration, as reproduced by the Tapiola Sinfonietta under Gábor Takács-Nagy, is lucid and deft, and the piece has allure.

Vladimir Blok's chamber orchestration of Rostropovich's completion of Prokofiev's Concertino is a brew of glistening celesta, while Sally Beamish opts for sequins in her tea-dance reimagining of Debussy's Suite for Cello and Orchestra.

The quiet mood of Steven Isserlis's latest disc may be partly explained by the dedication: "In loving and grateful memory" of his wife, Pauline, who died in June...Sally Beamish's rigorous reconstruction breathes life into Debussy's early, mostly lost Suite for Cello and Orchestra

Expect nothing po-faced from Steven Isserlis, a cellist never afraid of taking risks and revealing his heart. The disc’s repertoire is also distinctive. Emotions throb hardest in the songs and laments of Bloch’s From Jewish Life...Refined playing by the Tapiola Sinfonietta add to the pleasure.