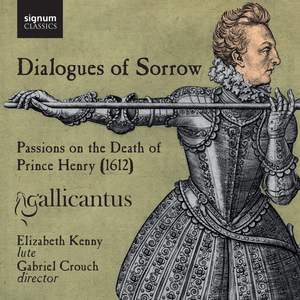 Passions on the Death of Prince Henry (1612)

Dering: And the King As Moved

Ramsey, R: How Are the Mighty Fall'n

Ward, J: Weep Forth your Tears

In 1612, Prince Henry Frederick, son of James I and heir to the thrones of England and Scotland, died from a suspected bout of typhoid fever. His untimely death inspired a massive outpouring of artistic tributes in both verse and music, reflecting the mood of a nation mourning the loss of this popular future king at just 18 years of age. This is the second disc from early music consort group Gallicantus, joined by lutenist Elizabeth Kenny to perform works of the early 17th Century by a variety of composers. Their performances reflect the precision of Tenebrae, combined with a passion and commitment to crafting exemplary interpretations of the music they love.

Despite the common theme and elegiac mood, there is some variety in the programme, in which madrigals alternate with lute songs...this is a well-sung, intelligently produced and exhaustively researched project, which deserves great success.

Gallicantus has compiled a selection of the mourning songs written for Henry...exquisitely rendered with clarity and poise, either a cappella or with just lute accompaniment. There is a fine balance of high and low registers, while the individual singers' solos are marked by calm sincerity.

The music is first-rate and Gallicantus creates an affecting picture of a nation in mourning with singing of textural and verbal clarity, suppleness and poignancy.

The Independent on Sunday 5th September 2010

Crouch's programme of madrigals, lute songs and motets explores the public outpouring of grief and bitterness at the death of Prince Henry in 1612...The voices of Gallicantus milk every plangent suspension.