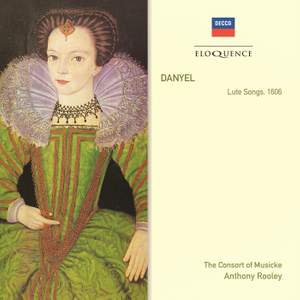 The Consort of Musicke

He Whose Desires Are Still Abroad

Dost Thou Withdraw Thy Grace

Why Canst Thou Not?

Drop Not, Mine Eyes

Have All Our Passions

If I Could Shut The Gate

I Die Whenas I Do Not See

What Delight Can They Enjoy?

Now The Earth, The Skies, The Air

Anthony Rooley writes: ‘Even in 1926, when Peter Warlock published his brief essay on the English Lute Songs, John Danyel was singled out as being perhaps the finest lute-song composer (John Dowland not excepted) by perceptive Warlock. Nobody believed him then, and not much has changed now – but I agree with Warlock. John Danyel composed some of the finest songs in the English language, but he has left us too little for him to be judged a ‘great master’! Just one slim volume of songs and a few exceedingly difficult lute solos in manuscript.

‘After I had completed the complete Dowland recordings in 1976/77, I was eager to be sure Danyel was made available too. I had discovered that his one book was designed not so much as a “song-cycle”, but as a “song-story”, carefully structured and sequenced. The craftsmanship is obvious from the start, but the extraordinary level of artistry in song achieved by Danyel is most apparent in the two “song-cycles” within the larger story: “Grief keep within” and “Can doleful notes?”. As Warlock observed, there is simply nothing to compare with these two works, in the entire Lute Song output. Danyel’s ability to create a large-scale architecture, both musically and emotionally, with the simplest of means is remarkable. He and Dowland were good friends; there was no enmity between them – only respect. I hope this reissue will find new Danyel converts!’