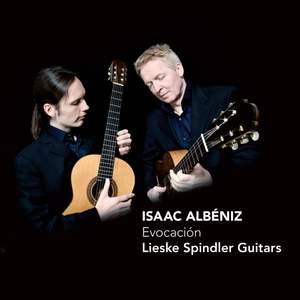 Lieske and Spindler's interpretations can be expansively orchestral in conception...or intimately lyrical and expressive...Albéniz apparently said his music appealed to him more when played on... — Gramophone Magazine, Awards Issue 2010 More…

To celebrate the 150th anniversary of the birth of Isaac Albéniz this summer, Wulfin Lieske and Fabian Spindler have recorded a 2-CD set of transcriptions of his piano works. The Austrian and German guitar duo play on a pair of original Torres guitars, recreating the ideal sound for Albéniz’s romantic Spanish music.

Isaac Albéniz (1860-1909) never wrote for the guitar, but admitted that some of his compositions appealed to him more when played on that instrument. As if he had sensed this, many of his piano pieces first became world-famous in transcriptions. Relatively few listeners know the originals today and think the guitar versions are the authentic ones - hence Albéniz’s outstanding reputation as a ‘guitar’ composer.

“The ideal sound of Isaac Albéniz’s music is indissolubly tied to the sound of the Torres guitar.” - Carles Trepat. The influential guitar virtuoso and composer Francesco Tárrega (who made some of the first transcriptions of his friend Albéniz’s piano pieces) mostly played an instrument made by the 19th-century Spanish luthier Antonio de Torres. Its design and the extended scale length endowed the new model exceptional volume, giving it outstanding depth, majesty in the bass, inner potency, clarity of registers, warmth and carrying power. These characteristics therefore form a crucial component of the interpretation, along with the appropriate version and the corresponding fingering. Playing original Torres guitars, Wulfin Lieske and Fabian Spindler have for the first time enabled the historical versions to be experienced in all their dimensions.

Lieske and Spindler's interpretations can be expansively orchestral in conception...or intimately lyrical and expressive...Albéniz apparently said his music appealed to him more when played on guitar. Hearing these performances on two such fine instruments, one can understand why that might have been so.