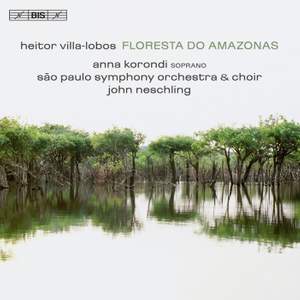 A Floresta (The Forest)

Em Plena Floresta (In the Depths of the Forest)

Canto na Floresta I (Song in the Forest I)

Em Caminhos para a Cacada (On the way to the Hunt)

The subject of the Amazonian forests surfaces in a number of works throughout Villa – Lobos’s output. In Floresta do Amazonas, one of his very last works, Villa-Lobos again focused explicitly on the rain forest, the creatures that live in it, and the myths that have been woven around it. The work has been described as a symphonic poem for soprano, male-voice choir and large orchestra, The songs, Melodia Sentimental in particular, have also become popular as separate concert items. The suite's twenty-three movements have rousing titles such as ‘Forest Fire', ‘Head Hunters' and ‘Dance of the Indians', but also include numbers such as ‘Lullaby' and ‘Twilight'.

The music is, of course, wilful, fluid, entirely unpredictable, with moments of extreme violence and tremendous beauty...The orchestration is variegated, by turns dense and transparent, lush and spare. Hungarian soprano Anna Korondi is excellent and her Portugese perfectly acceptable...Very warmly recommended.

It's a typical Villa-Lobos patchwork, including a male chorus chanting in an Amazonian language, extravagant vocalise for the soprano solo and lushly romantic textures straight out of Hollywood...this recording...reveals the score in all its rambling magnificence.