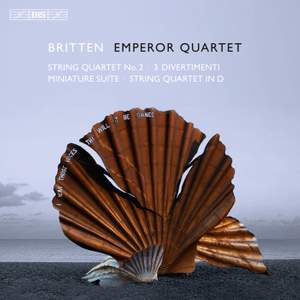 The Emperor Quartet gives a stupendous rendition of the Second Quartet, nuancing it with a fabulously imagined range of colour; it comes across as not only powerful but visionary...There are... — Classic FM Magazine, November 2010, 5 out of 5 stars More…

Includes the world première recording of the Miniature Suite

The Emperor Quartet was established a decade ago by Martin Burgess, violin; Clare Hayes, violin; Fiona Bonds, viola and William Schofield, cello. They were first British group to win the Evian/Bordeaux International String Quartet Competition where they were also awarded the Mozart and Contemporary Prizes. In their 10th anniversary year the Quartet were nominated for a Grammy award for their recording of Walton String Quartets.

The Emperor Quartet gives a stupendous rendition of the Second Quartet, nuancing it with a fabulously imagined range of colour; it comes across as not only powerful but visionary...There are sounds here that one mightn't have realised a string quartet could make.

In their very different ways these are highly imaginative works and they receive lively, engaging performances here...the Emperor Players...captur[e] the essential Britten style well - salt-sea splashes of sound, straight out of Peter Grimes, in the Vivace - and able to build up the final Chacony as inexorably as any.

With the quality of the competition so consistently high, do we really need another recording of Britten quartets? When the playing is as outstanding as this, the answer is an irrevocable 'yes'...The inner parts are clearly audible and well-balanced.

The Emperor Quartet play all three with the right mix of witty insouciance and technical accomplishment, but the group reveals its true colours in the Second Quartet.