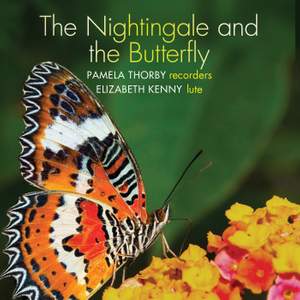 The Nightingale and the Butterfly

Virtuoso playing and scholarly research come together in this disc of French Baroque works...Thorby's eclectic experience in Baroque, jazz and folk music is everywhere apparent in these performances,... — BBC Music Magazine, December 2010, 5 out of 5 stars More…

"A wonderful artist at her very best: relaxed, stylish, unpredictable and distinctive of tone." Independent on Sunday

Following her successful collaborations with Richard Egarr and Andrew Lawrence-King world-famous recorder player Pamela Thorby teams up with renowned lutenist Elizabeth Kenny for her fourth solo album on Linn, ‘The Nightingale and the Butterfly’, a sparkling exploration of French Baroque music.

Thorby and Kenny, both specialists in Baroque repertoire, give a unique interpretation of these appealing works whilst uncovering the beauty of some lesser-known gems.

Pamela has appeared many times as a soloist at major UK festivals and venues including Wigmore Hall and the Royal Albert Hall.

Elizabeth Kenny, one of the UK’s foremost lute players, performs regularly with the Orchestra of the Age of Enlightenment, Gabrieli Consort and Les Art Florissants.

Virtuoso playing and scholarly research come together in this disc of French Baroque works...Thorby's eclectic experience in Baroque, jazz and folk music is everywhere apparent in these performances, with combination of technical precision and improvisatory flair...a disc full of delights and surprises

Kenny provides Thorby with a firm yet subtly nuanced harmonic and rhythmic support, her clean attack on each leading note balancing the louder sound of the recorder. Thorby plays with her customary vigour and agility, with generous and judiciously applied ornamentation.

Pamela Thorby's soft, sweet, natural tone is ideally suited to the whimsical delicacies of d'Hervelois, Philidor and Dieupart...The birds and butterflies of French Baroque music are artful accomplices to Eros and Morpheus, and genial companions for summer evenings.