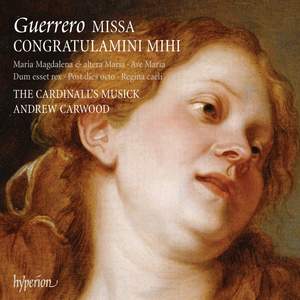 The award-winning Cardinall’s Musick have finally completed their Byrd series, and now look outside the British isles to a composer who had to wait for a long time for his genius to be fully recognised, although he was well known to his contemporaries, and produced a considerable output. Guerrero was born in 1528 in Seville, the city that was to remain at the centre of his entire life. His early training came from his brother Pedro and it is thought that he was a chorister at the magnificent Cathedral in Seville with its sumptuous music foundation. Guerrero himself states that he studied with Morales, and it was Morales who recommended the young musician for the post of maestro de capilla at Jaén Cathedral in 1546 – a short-lived appointment.

The main work on this disc is the gloriously sunny and joyful Missa Congratulamini mihi. Based on an Easter motet by Crecquillon (also recorded here), it is full of the voluptuous exuberance of the Paschal season. The five-part texture, with two treble parts, adds to the shining sound.

Also included are a number of Easter motets. Maria Magdalena et altera Maria and Post dies octo are highly descriptive, narrative works, highly contrasted in mood and texture. The four other pieces on this disc show various facets of Guerrero’s mastery. Dum esset rex (in honour of Mary Magdalene) is similar to a spiritual madrigal whilst the eight-part Ave Maria is a sonorous double-choir plea to the Virgin. The two settings of Regina caeli (the Marian antiphon to be sung during Eastertide) both use a plainsong cantus firmus as their starting point. The older sounding, four-part version uses a minor-mode motif whilst the eight-part setting uses the more traditional plainsong melody woven into an exuberant and joyful Easter statement.

[Cardinall's Musick] encounters little difficulty in these well-written pieces...the singers are at their balanced best in Guerrero's Ave Maria for double choir, and their confident, perky attack on the rollicking Osanna of the Congratulamini Mass is delightful.

This latest addition to Guerrero's discography is especially to be welcomed for his fine Mass on a motet by Thomas Crecquillon...Like its model it is a joyful, extrovert piece, to which Andrew Carwood's singers respond with an equal measure of buoyancy and vigour.

All are delivered with the combination of superb ensemble, and perfectly characterised vocal lines that is the persistent hallmark of this outstanding group; the sound is rich, full and gently resonant.

Carwood has nurtured the group to its current status as a leading exponent of Renaissance music, retaining the essential quality of individual vocal timbres that contribute to a refined, characterful mix and with a polish that is second to none...the entire disc, with various shorter pieces as complements, is captivating in its fluency and expressive power.