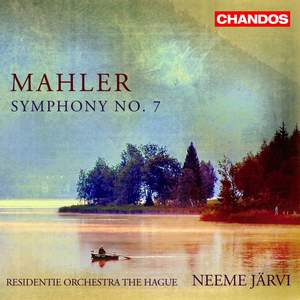 [it is] as if Järvi wants to stress beyond all doubt that the symphony represents a new direction for Mahler: more experimental, more abstracted...[He] plainly revels in the spookhouse effects... — Gramophone Magazine, August 2010 More…

Neeme Järvi has been recording for Chandos for several decades now, especially with the Royal Scottish National Orchestra, with which he has made more than 100 CDs. Many of these recordings have received tremendous critical acclaim and include several Gramophone Award Winners.

This is his second Chandos recording with the Residentie Orchestra The Hague, of which he is chief conductor. The first, of Bruckner’s Fifth Symphony (CHSA5080) was released in April to excellent acclaim. Gramophone wrote: ‘Järvi is too good a musician not to take his players with him. Indeed the Dutch musicians display a certain daredevil nonchalance as they breeze their way through the epic 635-bar finale.’

Mahler’s Seventh Symphony is perhaps the least well known of all Mahler’s symphonies. Its five movements were written over a period of two years, 1904 – 05, and scored and revised in 1906. The symphony has no programme, but the two serenade movements were influenced by the German romanticism of the poetry of Eichendorff, and elements of the fairytale, the macabre, and the sentimental permeate these movements.

Even though the symphony is imbued with a richness of melody, and bold and original harmonies, it is perhaps the most enigmatic of all Mahler’s symphonies. It begins with a striking funeral march, which develops into a powerful allegro, though the music is at the same time full of ‘dream-like’ elements. These dream-like fantasy elements pervade the serenade movements, which are separated by an exciting central scherzo, and the symphony ends with a vigorously contrapuntal finale. Perhaps the symphony can be seen as a journey from darkness to light, from the B minor gloom of the beginning, to the blaze of C major at the end. The journey is fascinating and very rewarding.

[it is] as if Järvi wants to stress beyond all doubt that the symphony represents a new direction for Mahler: more experimental, more abstracted...[He] plainly revels in the spookhouse effects of the nocturnal inner movements

here is playing of a very high international standard throughout. Never once do the musicians let their conductor or composer down, and the internal balance of the vast instrumental forces Mahler demands is admirable. Everything is clear, sonically, from the most finely detailed solos to the largest tuttis...This is a fine achievement all round.