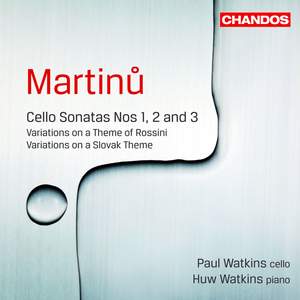 There is a strong sense of ensemble at every stage, but beyond this, the performers have an instinctive grasp of the often mercurial dynamics of this music...Perhaps best of all is their reading... — BBC Music Magazine, August 2010, 5 out of 5 stars More…

Martinů: Variations on a Theme of Rossini

Paul Watkins is one of the world’s finest cellists. He is much in demand throughout the world and although he has made several recordings for Chandos in the past, this is his first as an exclusive artist. He is accompanied by his brother Huw Watkins, with whom he has developed an extremely rewarding musical partnership.

The three cello sonatas of the Czech composer Bohuslav Martinu span the period 1939 – 52 and are full of rewarding musical invention. The experience of his long exile was often expressed in his music, particularly here in the Third Sonata and in the Variations on a Slovak Theme. If in the First, competed in 1939, the unease occasioned by World War II may be detected in the first two movements, the energetic finale, driven by Martinu’s motoric rhythms, prompted the composer to remark of its first performance: ‘It came as a last greeting, a beam of light from a better world (which is the opinion of others, not my own). For several minutes we realised what music could give us and we forgot about reality.’

In the Second Sonata, of 1941, the composer embraced classical forms, though the first movement is typically vigorous and energetic, in the composer’s most rhythmic manner. The second movement is full of passionate longing, with a gorgeous lyrical cello line, whilst the finale uses the composer’s characteristic motor rhythms, with powerful stamping gestures suggesting Bohemian peasant dances.

The Third Sonata, completed in October 1952, is the most immediately appealing of the three sonatas, full of attractive Czech melodies and offering essentially good-natured melodies and harmony – as well as humour, especially in the finale.

The Variations on a Theme of Rossini (1942), dedicated to Gregor Piatigorsky, shows the composer at his most wittily light-hearted, and offers brilliance and virtuosity in spades. The Variations on a Slovak Theme (1959) were written during the composer’s final illness – Martinu had been diagnosed with stomach cancer. They are certainly appealing and resourceful, but strong feelings for the distant homeland are distinctly audible.

There is a strong sense of ensemble at every stage, but beyond this, the performers have an instinctive grasp of the often mercurial dynamics of this music...Perhaps best of all is their reading of the Variations on a Slovak Theme which manages to capture both the music's pungency and expressive depth...Altogether an enormously impressive disc.

The Watkins duo sound convincingly on Martinu's wavelength from the first bar of the First Sonata...The two sets of variations come off superbly too...An excellent disc and the best of the commerically available sets.

Paul and Huw Watkins prove committed advocates of this repertoire and their performances can hold their own against their finest rivals...The Chandos sound is expertly balanced, natural and lifelike.

In Paul and Huw Watkins’s hands, these rarities are eminently worthy of discovery.