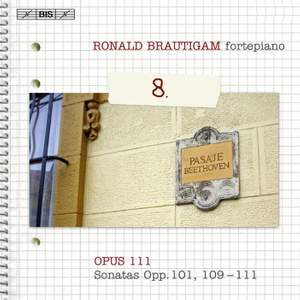 There are few early-instrument practitioners who can match Brautigam's music insight and technical prowess...there are no holds barred in his impressively passionate account of Op. 111's opening... — BBC Music Magazine, September 2010, 4 out of 5 stars More…

The Dutch fortepianist completes his outstanding cycle of the complete sonatas on BIS, with revelatory accounts of Opp. 101 and 109-111.

With this disc, Ronald Brautigam has reached the last of the 32, completing a sonata cycle which has made a great impression on all who have been following it. A review in The Times stated: ‘Beethoven the revolutionary comes closer than ever in Brautigam's fiery interpretations.'

Brautigam has chosen to record these seminal works on fortepiano, and throughout the series uses two different instruments mirroring the rapid development of the piano during the three decades that saw the birth of these sonatas.

There are few early-instrument practitioners who can match Brautigam's music insight and technical prowess...there are no holds barred in his impressively passionate account of Op. 111's opening Allegro

The clarity that Brautigam achieves serves to offset the briskness of the tempos and the gain lies in the clear structural cohesion, with momentum clearly directed...This lack of indulgence is a hallmark of Brautigam's Beethoven...and [he] always mantains direction...This survey provides some of the finest Beethoven playing I have ever heard.

In Brautigam’s hands the music sounds lyrical and perfectly phrased without in any way sounding mannered. Because the fortepiano doesn’t have the same sustaining power as a modern piano Brautigam’s tempos for the slower movements are often slightly faster than you might be used to. But they never sound rushed, and always feel natural, while giving him the opportunity for a little ebb and flow without danger of losing the musical line.