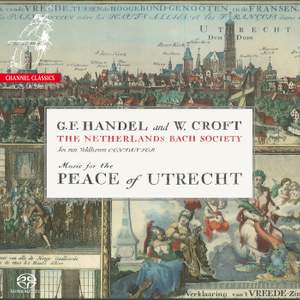 I. Soli and Chorus

Croft: Ode for the Peace of Utrecht (With Noise of Cannon)

Vers - With Noise of Cannons

Duet - Peace is the song

Chorus - The soul of musick

Aria - Nor will we ev'n the martial trumpet spare

Chorus - Where, mighty anna, will thy glories end

The Treaty of Utrecht, which established the Peace of Utrecht, comprises a series of individual peace treaties, rather than a single document, signed in the Dutch city of Utrecht in March and April 1713. The treaties among several European states, including Great Britain, France, Spain, Savoy, and the Dutch Republic, helped end the War of the Spanish Succession. The treaties were concluded between the representatives of Louis XIV of France and Philip V of Spain on the one hand, and representatives of Queen Anne of Great Britain, the Duke of Savoy, the King of Portugal and the United Provinces on the other.

This was the first peace achieved through diplomacy, with thanks to the hospitality of Utrecht. The Peace of Utrecht was celebrated in 1713 with music, festive fireworks and specially commissioned compositions such as the Utrecht Te Deum and Utrecht Jubilate by George Frideric Handel (1685-1759) and the Ode for the Peace of Utrecht by William Croft (1678-1727).

In 2013, Utrecht once again will be the host, stage and partner of festivities, arts and culture. Founded in 1921, The Netherlands Bach Society is the oldest Early Music ensemble in the Netherlands, and possibly in the whole world. Yet along with the musicians, its artistic director Jos van Veldhoven is still continually in search of contemporary ways of presenting this music, whether it be the traditional performances of the St. Matthew Passion in Naarden, other works by Johann Sebastian Bach (1685-1750) or music by his predecessors, successors, contemporaries and fellow spirits.

Jos van Veldhoven's excellent Dutch musicians are joined by a team of mostly English soloists...The Netherlands Bach Society fires on all cylinders in the Jubilate...The choir handles lively counterpoint intuitively...Contrasts between penitent intimacy and and colourful magnificence are managed shrewdly by Veldhoven.

...the performances, with Jos van Veldhoven conducting the Netherlands Bach Society, are terrific...the fires of political and humanitarian justice still blaze in the majesty of the choral singing and the elation of the playing.

The instrumental performance is airy, the choral singing sturdy and joyous, while William Towers and Peter Harvey beguile in Croft's duet on a ground bass, "Peace Is the Song".