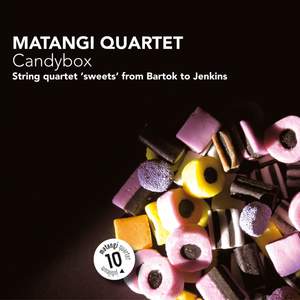 “Candybox” is a mouthwatering selection of pieces for string quartet released to mark the 10th anniversary of the Dutch group, the Matangi Quartet. Amongst the works is the Second String Quartet by the immensely popular contemporary British composer Karl Jenkins. The CD also includes ‘bonbons’ by Dutchman Charles Meijering (composed specially for this celebration), Revueltas, Suk and Turina, and a pair by Bartók and Vladimír Godár arranged for string quartet.

The Matangi Quartet (Maria-Paula Majoor & Daniel Torrico Menacho, violins; Karsten Kleijer, viola and Arno van der Vuurst, cello) was founded in 1999 by four young musicians then studying at the Royal Conservatoire in The Hague and the Conservatory of Rotterdam. In 2003 Matangi completed the two-year, full-time course at the Netherlands String Quartet Academy under the direction of Stefan Metz, cellist of the Orlando Quartet. At the Academy, the Matangi Quartet had the opportunity to take lessons from internationally renowned musicians, including the members of the Amadeus Quartet, and Henk Guittart, violist from the Schoenberg Quartet).

Two of the composers are relatively unknown in the UK, Chiel Meijering (born 1954) and Vladimír Godár (born 1956). Slovak composer Vladimír Godár’s highly atmospheric cantata Mater (4765689), partly based on traditional and early music, made a particularly strong impression when released by ECM New Series in 2006. Caixa de Dolços (meaning ‘Candybox’ in Catalan), a new piece written to mark the Matangi Quartet’s 10th anniversary, by prolific Dutch composer Charles Meijering can be heard and viewed at http://www.euronet.nl/~hubiware/HomeChiel.html