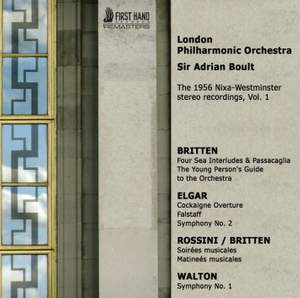 The Walton Symphony...comes up more brightly than previously: it's an intensely rhythmic performance...the slow movement builds surely and passionately, and the finale comes as the culmination... — BBC Music Magazine, October 2010, 3 out of 5 stars More…

Eastcheap. The Robbery at Gadshill. The Boar's Head Again. Revelry and Sleep

Falstaff's March. The Return through Gloucestershire. The New King and the Hurried Ride to London.

King Henry V's Progress: The Repudiation of Falstaff and His Death

The Young Person's Guide to the Orchestra: Variations and Fugue on a Theme of Henry Purcell, Op. 34

A release that all Boult fans have been waiting for :-

Cockaigne is the first release in the UK in any format.

Most works are first releases on CD of the original Westminster source masters.

First release on CD of Elgar’s Falstaff from tape source.

All recorded at Walthamstow Assembly Halls in 1956, re-mastered at Abbey Road Studios 2010.

The Walton Symphony...comes up more brightly than previously: it's an intensely rhythmic performance...the slow movement builds surely and passionately, and the finale comes as the culmination and catharsis that it should be

...the performances of Britten and Walton...give a wider sense of Boult's sympathies as an interpreter. this account of Falstaff, in particular, has never been bettered for its sense of drama and narrative flow...The orchestral sound...generally stands up well in these transfers.