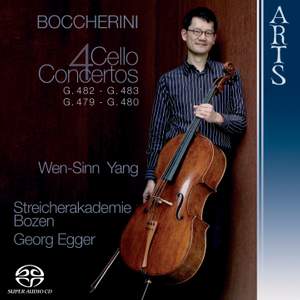 This Hybrid SACD re-issue includes four Concertos for cello and orchestra by Luigi Boccherini. They are the most well known among Boccherini’s twelve Cello Concertos (G.479, G.480, G.482, G.483) but have been recorded in the less usual original version. They are performed by the cellist Wen-Sinn Yang with the String Academy Bozen and Georg Egger.

Luigi Boccherini was born in Lucca, Italy in 1743, and spent much of hi early life studying the cello. Although not as popular or well-recorded as many others, Boccherini’s 12 cello concertos represent some of the best examples of music for the instrument during the late baroque and classical periods.

The Swiss-Taiwanese cellist Wen-Sinn Yang made his debut for the Avie label in April, recording ‘Virtuoso Works for Solo Cello’ by Kodály, Ysaÿe, Cassadó and others (AV2160).

Yang has made many appearances as a soloist with Bavarian Radio Symphony Orchestra, under the direction of Lorin Maazel. The South Tyrolean orchestra String Academy Bozen includes some of the best musicians from Austria, Germany and Italy and is conducted by its leader, violinist Georg Egger.

"A sweetness of tone and purity of line ... quite disarming" International Record Review