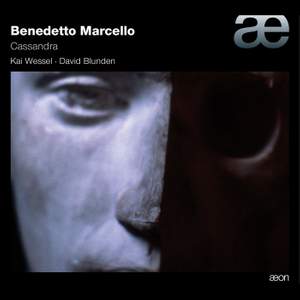 Marcello, B: Cassandra, Cantata per alto

The Venetian poet Antonio Conti received from Marcello the commission for a dramatic text that allows a quick succession of events, rather than the usual succession of recitative and arias.

Cassandra plunges us into Homer’s Trojan War, with its namesake prophetess who has the gift of predicting the future, but whom no one believes. The many [25] extant copies of this cantata, here given its world première recording, testify to the impact it had in its own time. Charles Burney reports a performance in Venice in 1770 at which the cantata was impressively interpreted by a bass, but almost all the manuscripts are headed by ‘Cantata per Alto’. The range of the vocal part stretches more than three octaves, which explains the difficulty in finding an interpreter able to sing it: it may be that Cassandra was sung by a bass performing as an ‘altus’. Following the practice of the time, Kaï Wessel and David Blunden have taken the liberty of improvising interludes at a few points where the action shifts between vision and oracle – in concert these also provide brief moments of rest for the voice.