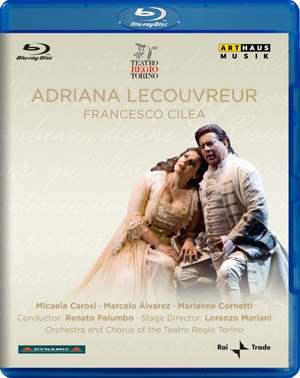 Carosi may lack some smoothness of line in her arias but she delivers them with fervour and strong tone and does not hold back in the Phaedra monologue, so the character which she projects is... — International Record Review, September 2010 More…

It is said even Giuseppe Verdi briefly gave consideration to writing an opera based on this whodunit, when Cilea decided to set the material to music in 1899. The opera’s world premiere in Milan in 1902 was a triumph, due in no small measure to a stellar cast of singers that included Enrico Caruso as Maurizio. For a decade the work was performed regularly throughout Europe and America; thereafter it increasingly disappeared from the repertoire. After revisions to the score and plot and the introduction of significant cuts, Adriana Lecouvreur made a successful comeback and established a presence once again on the international stage. The premiere of the defi nitive version took place in Naples in 1930. Since this time the three main roles of Arturo Colautti’s libretto have regularly been filmed by great artists.

In the present stylised production by Lorenzo Mariani, which features reduced décor but magnifi cent rococo costumes, the “violet-perfumed murderess” is taken by mezzo-soprano Marianne Cornetti, one of the most in-demand representatives of her vocal category. Opposite her, in the role of Adriana, is a soprano who as a Verdi and verismo specialist also appears regularly at all the major international opera houses, Micaela Carosi. The “cock-of-the-walk” role is sung by the world-class tenor Marcelo Álvarez. His timbre, velvety smooth yet robustly virile, is ideally suited to a vocal characterisation of the idolised Maurizio. Conductor Renato Palumbo is very much at home with Cilea’s operatic masterpiece, since the Italian Romantic and verismo periods are at the core of his extensive repertoire.

Carosi may lack some smoothness of line in her arias but she delivers them with fervour and strong tone and does not hold back in the Phaedra monologue, so the character which she projects is well drawn...Marianne Cornetti blazes forth in an unbridled release of big, powerful vocalism