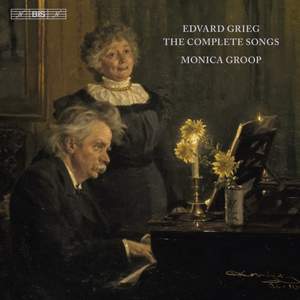 The seven discs that make up the collection have previously been released separately, to great acclaim from reviewers around the world: ‘Something of a landmark in the Grieg discography… Monica Groop penetrates the very essence of the Grieg spirit with the artlessness that conceals art’, wrote International Record Review about one instalment, while a BBC Music Magazine review described another as ‘an irresistible new take, thrilling to both the shadows and the bright high-latitude light in this music.’ In her own introduction to the project Monica Groop writes: ‘I have always felt a special and instinctive affinity for Edvard Grieg and his music ... I admire his gift of being able to write simple, natural music and I have sought to preserve this in performance.’ In these endeavours the acclaimed Finnish mezzo-soprano has enjoyed the expert support of three fine pianists: Roger Vignoles, Ilmo Ranta and Love Derwinger.