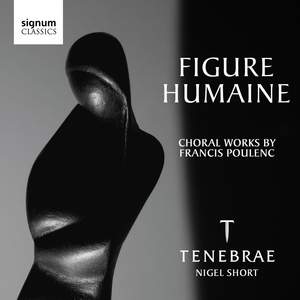 Tenebrae is equal to every challenge. The tuning is impeccable, the phrasing intelligent and never forced, the balance always adjusted to the demands of Poulenc's textures...Not least, the sopranos... — BBC Music Magazine, August 2010, 5 out of 5 stars More…

Francis Poulenc is now considered to be among the most important composers of choral music of the 20th Century. Yet his early career reveals no trace of the dazzling and idiosyncratic unaccompanied choral textures so abundantly produced in the second half of his life. This new collection of Poulenc’s choral works, virtually a ‘best of’, is centered on his masterwork, Figure Humaine. Even though it is only 20 minutes in length, the work is a supreme test of stamina, technical agility, range, aural skill and musicianship. The professional chamber choir Tenebrae (directed by former King’s Singer Nigel Short) are more than capable of tackling this repertoire and this disc promises to provide a new benchmark in interpretations of the work.

Tenebrae is equal to every challenge. The tuning is impeccable, the phrasing intelligent and never forced, the balance always adjusted to the demands of Poulenc's textures...Not least, the sopranos float ethereally in the more lyrical moments...A disc to be treasured.

Their singing has a precision of pitch, a rhythmic vigour and a musical focus few choirs can equal...Nigel Short, similarly, has studied these scores to the extent that he realises every tiny nuance of Poulenc's writing and produces that kind of performance that offers an almost transparent level of textural precision.

An absolute tour de force from the British chamber choir Tenebrae here, singing in idiomatic French and with absolute technical assurance, even in the face of the fearsome challenges presented by the centrepiece, Figure Humaine (top E for the sopranos and all!). The Mass in G , Litanies for the 'Black Virgin' and other works also come off with aplomb.

[Le Figure Humaine is] not only one of Poulenc's greatest achievements, but one of the 20th century's most extraordinary choral pieces, with its waves of voices climaxing in the great shouts of Liberté in the closing moments, which Tenebrae control quite beautifully.

Poulenc had vocal expertise in mind when he wrote his choral music, and that is what he gets in this fine selection of six works...all performed with colour and skill by Tenebrae.

For purity and precision of tone, and flawless intonation, Nigel Short’s chamber choir Tenebrae is pretty much unbeatable...It’s quite a whirl, but Tenebrae’s firm sense of pitch keeps them upright and their beauty radiates like a halo. Warm, affecting music, thrillingly performed.