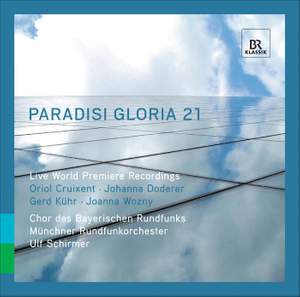 “Paradisi gloria 21” – under this title, this CD combines four world première recordings of 21st century sacred works. All the compositions were commissioned by Bavarian Broadcasting and employ different musical forces to reveal the wide stylistic palette of contemporary sacred music. While the works by Oriol Cruixent and Gerd Kühr treat the “Magnificat” theme, Joanna Wozny and Johanna Doderer offer approaches to the figure of Mary, the mother of God, in their compositions. With the Münchner Rundfunkorchester and the Chor des Bayerischen Rundfunks we have two ensembles with tremendous experience in the interpretation of new music. The Paradisi gloria concert series, initiated in the year 2000 by Marcello Viotti, and carried forward since 2006 by Ulf Schirmer, forms the heart of contemporary sacred orchestral and choral music in Munich’s musical life and, beyond this, also enjoys international renown.

Four world premières by the new generation of composers combined on a single CD.

The Chor des Bayerischen Rundfunks and the Münchner Rundunfkorchester under