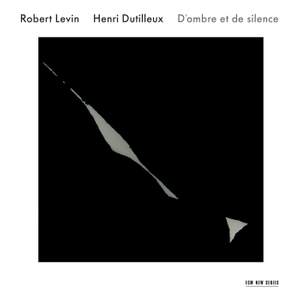 Levin fully understands the whole work's structure and his fingers to all that could be asked of them. He is alive, too, to the poetry of the atmospheric pieces and, with Ya-Fei Chuang, gives... — BBC Music Magazine, August 2010, 5 out of 5 stars More…

The first-ever release on ECM of music by the doyen of French contemporary composition Henri Dutilleux (born 1916) features a comprehensive overview of his highly original piano pieces from his early period (around 1948) to the late eighties. They are played by American pianist Robert Levin, a personal friend of Dutilleux’s, who gives performances of gripping energy and serene clarity.

Levin notes: “Dutilleux has always kept a discreet profile, composing with painstaking perfectionism, subjecting his works to relentless revision before, and sometimes after, they have been presented to the public”. So his output is rather small, but these polished masterworks follow the ideals of beauty and poetic mystery – structurally complex but full of colouristic and rhythmic appeal. This programme opens with the ground-breaking piano sonata of 1946-48, marked by a personal synthesis of French Impressionism and the clear-cut rhythmic contours characteristic of Soviet music of the same period. The shorter pieces – radiant, playful and highly sophisticated music condensed to its very

essence – “document Dutilleux’s trajectory from extended tonality to a sound world totally of his own invention, in which harmonies of dazzling iridescence inflect brilliant rhythmic and melodic gestures”.[.i]

Robert Levin (born 1947) is an internationally-renowned expert on classical period practice of improvised embellishments and cadenzas. His many recordings include Mozart concertos with Christopher Hogwood and the Academy of Ancient Music, and Beethoven concertos with John Eliot Gardiner and the Orchestre Révolutionnaire et Romantique. As Kim Kashkashian’s regular piano partner, he has recorded for ECM since 1984, most recently Songs from Spain and Argentina. In Figures de résonances the second pianist is Ya-Fei Chuang.

Levin fully understands the whole work's structure and his fingers to all that could be asked of them. He is alive, too, to the poetry of the atmospheric pieces and, with Ya-Fei Chuang, gives gripping performances of the four Figures de resonances.

On this finely engineered ECM disc, Robert Levin's performance is all the more impressive for the unbridled energy and clarity with which it puts the music's distinctive argumentative character across.

[Dutilleux] clearly suits [Levin], as the performances are wonderful. The later works are marvels of sheer sound, sometimes stark and bell-like, sometimes shimmering.