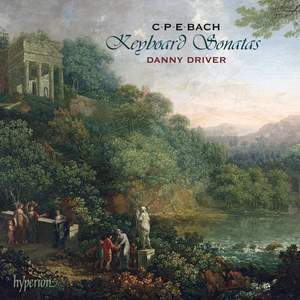 Danny Driver...makes his superlative case for music that is as inventive as it is unsettling. Playing with imperturbable authority, he captures all the mercurial fits and starts of the G minor... — Gramophone Magazine, July 2010 More…

The pianist Danny Driver has garnered the highest possible praise for his two York Bowen discs on Hyperion. Now, demonstrating his extraordinary versatility, he turns to a composer from a very different age—yet one who has been similarly overlooked by the musical establishment, while always having a place in the heart of connoisseurs of arcane keyboard music.

Carl Philipp Emanuel Bach (1714–1788), second son of Johann Sebastian, was both revered and criticized by his contemporaries for his bold departures from conventional modes of musical expression. He perfected a highly original and intensely personal compositional style known as the empfindsamer Stil (literally, the ‘sensitive style’). As the works on this recording show, Bach’s approach to musical expressiveness found voice in frequent mood changes, abundant rests and ‘sighing’ motifs, the juxtaposition of contrasting rhythmic figures, deceptive cadences, and dramatic, rhetorical harmonic interjections. Bach became particularly renowned for his ability to improvise fantasias—seemingly free-form, stream-of-consciousness flights of fancy characterized by unmeasured rhythm and distant harmonic excursions. Yet underlying even the most improvisatory of his compositions is a coherent structure.

Emanuel Bach’s music breaks dramatically away from, yet also builds upon, the early eighteenth-century style perfected by his father. His compositions mark one of the first—and among the most inspired—repudiations of the baroque aesthetic, in which a single unified mood dominates each movement. Emanuel Bach composed more than three hundred keyboard works during his lifetime—all of the works on this recording were composed during the 1740s, while in the service of King Frederick II of Prussia.

Danny Driver...makes his superlative case for music that is as inventive as it is unsettling. Playing with imperturbable authority, he captures all the mercurial fits and starts of the G minor Sonata...It would be impossible to over-estimate Driver's impeccable technique and musicianship...This is surely one of the finest of all recent keyboard issues.

[CPE Bach] was no pale imitation of his father. He had ideas of his own, as the bristling, thoughtful and imaginative playing on this disc testifies...Driver meets the interpretative challenges with a lively mind, dexterity and warm sensibility in a way that brings CPE Bach’s startling originality sharply into focus.