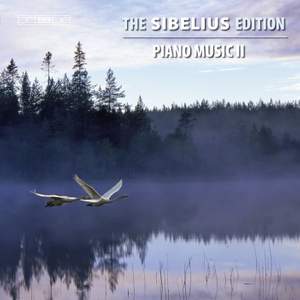 All recordings included are previously unreleased and 14 pieces are world première recordings.

No. 6. Prelude to Act III Scene 1, "Melisande at the Spinning Wheel"

No. 1. Rondino in G-Sharp Minor

No. 2. Rondino in C-Sharp Minor

Kellosavel Kallion kirkossa (The Bells of Kallio Church), Op. 65b

No. 3. Auf dem Tanzvergnugen (At the Dance)

No. 1. Nar ronnen blommar (When the Rowan Blossoms)

No. 1. The Village Church

II. Dance of the Nymphs

No. 4. Metsalaulu (Song in the Forest)

Although less well-known than his orchestral works, his output for the piano is extensive, and we can now present the second instalment of music for solo piano in the BIS Sibelius Edition. The music on this second set was written between 1905 and 1931, and includes the Three Sonatinas, widely seen as some of Sibelius’s finest piano works, as well as the five pieces from the composer’s Op.75, commonly known as ‘The Trees’. Among the several world première recordings in this collection we find an Adagio written for his wife Aino’s birthday in 1931, Sibelius’s last composition for piano – and his only one for piano four-hands. Included are also a number of Sibelius’ own transcriptions, mainly of music he had composed for stage performances of plays such as Pelléas et Mélisande. A special case in this category is the four minute long reworking for the piano of an original bell melody written in 1912 for Helsinki’s newly built Kallio Church.