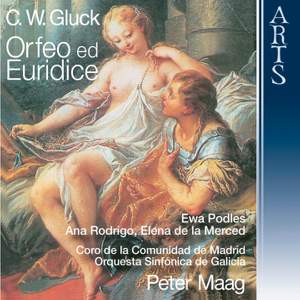 This double SACD is a re-issue of an acclaimed live recording from 1998 of one of the key operatic works of the 18th century, Gluck’s Orfeo ed Euridice. It is performed by the Orquesta Sinfónica de Galicia, the Orquesta Sinfónica de Madrid and the Coro de la Comunidad de Madrid under the esteemed conductor Peter Maag. The fine cast of soloists includes Ewa Podles, Ana Rodrigo, and Elena de la Merced.

Christoph Willibald Gluck’s Orfeo ed Euridice is an opera whose historical value is as great as its musical worth. It stands as a starting point for what is often referred to as the “Gluck reform” of Italian serious opera, and the first performance of Orfeo, which took place in Vienna on the 5th of October 1762, is considered to be one of the key moments in the history of music in the eighteenth century.

The recording was made in 1998, and features the legendary musical director Peter Maag, a conductor who is thought by many to be one of the greatest operatic conductors of his time, and is especially renowned for his performances of Mozart’s stage works.