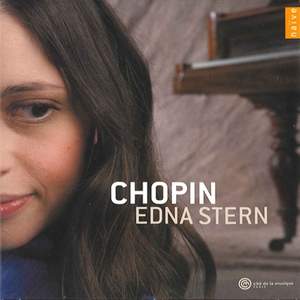 The tone is soft and sweetly tactile in the medium register, becoming harder and brighter in the treble, while the single-escapement action makes it harder to play fast repeated notes than on... — The Independent, 23rd April 2010, More…

Etude No. 1 in F minor: Andantino

Etude No. 2 in A flat major: Allegretto

Naïve celebrates the bicentenary of Frédéric Chopin’s birth with the debut release from Israeli pianist Edna Stern - a programme devoted to the Polish composer’s Sonata No 2 and various short pieces, performed on the famous 1842 Pleyel piano at Paris’s Musée de la Musique.

The award winning Belgian-born Israeli pianist, Edna Stern, presents an all Chopin programme featuring a selection his Études, Waltzes, Préludes and Ballades, together with the well-known Sonata No 2. Chopin admired above all others the pianos of the firm of Pleyel. For this recording, Edna Stern plays the famous Pleyel piano (1842) held at the Musée de la Musique in Paris. The grand Pleyel piano is characteristic of the instruments Chopin had at his disposal during the last ten years of his life, it is very similar to the grand piano of 1839 which belonged to the composer from 1839 to 1841.

This release is part of the Cité de la Musique series on Naïve – offering internationally renowned musicians the opportunity to record on the legendary instruments on display within the museum of early instruments at the Cité de la Musique. Edna Stern is a multi-award winning recording artist. Her first recording, ‘Chaconne’, won the Diapason Découverte and Arte ‘Best CD 2005’ awards. She has been described as having “the panache of Martha Argerich, the musicality of Leon Fleisher and the impeccable finish of Krystian Zimerman.” (Diapason, August 2005).

The tone is soft and sweetly tactile in the medium register, becoming harder and brighter in the treble, while the single-escapement action makes it harder to play fast repeated notes than on modern instruments, though this matters less when the material is played as deliberately slowly as in Stern's interpretations.

Mercurial and meditative, Stern’s interpretations are distinctive enough. But it’s her piano that makes the big difference: an 1842 Pleyel, which clouds most of the notes in a velvety darkness, transforming textures and cutting out scintillating display. Odd? Perhaps. Yet this muffled sonority was what Chopin favoured.