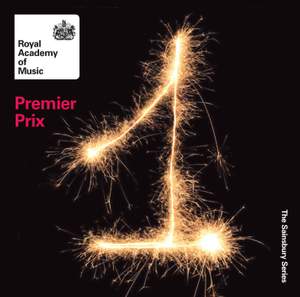 The Royal Academy of Music celebrates the virtuoso with this disc inspired by the Paris Conservatoire's ultimate accolade. The core of the disc is music commissioned by the Conservatoire: a clutch of masterpieces from near the turn of the 20th -century by Debussy and Enescu, mid-century competition set-pieces by Jolivet and Dutilleux and a late example of the genre by Dubois. The cream of recent Academy students also explore changing conceptions of virtuosity in France over a longer period with works by Mozart, Wieniawski and Ravel, and the disc closes with Baasvik’s remarkable solo tuba piece Fnugg. The disc features performances by some of the most exceptionally talented virtuosi to have recently studied at the Royal Academy of Music. Accordionist Ksenija Sidorova has already won numerous awards; Adam Walker was appointed Principal Flute with the London Philharmonic Orchestra at the age of 21 and soon afterwards became Principal Flute of the London Symphony Orchestra; Huw Morgan was the youngest ever winner of both the International Trumpet Guild Solo and Orchestral competitions; clarinettist Anna Hashimoto made her Barbican solo debut at the age of 15 and has now given numerous recitals of solo and chamber music at Wigmore Hall; bassoonist Karen Geoghegan made her BBC Proms debut in 2009 and has made several recordings with Chandos; Jaroslaw Nadrzycki won the 2009 George Enescu International Violin Competition and has made numerous concerto appearances; Suzie Thorn has been principal oboe with the National Youth Orchestra, the Britten-Pears Orchestra and the European Union Youth Orchestra in addition to solo performing; Mariangela Vacatello was a prizewinner at the ‘Top of the World’ Piano Competition 2009 and Finalist at the Van Cliburn Competition 2009, where she won the Worldwide Audience Award; and Sasha Koushk-Jalali has performed across Europe as Principal Tuba with the Mahler Youth Orchestra. The pianists Albina Stulpinaite, Tadashi Imai, John Reid, Robin Davis, Jacob Barnes and Chris Hopkins continue the Academy's unsurpassed tradition of the very finest accompaniment performances.