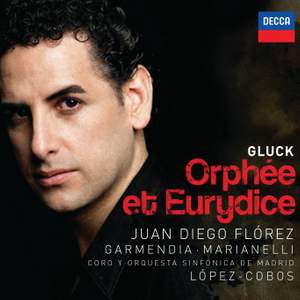 Flórez's rapid vibrato and sweetness give the impression of gliding brightly above the music. His is an elegant, aloof Orpheus...Alessandra Marianelli's Amour is sparkling — BBC Music Magazine, June 2010, 3 out of 5 stars More…

Juan Diego Flórez stars as the musician and poet Orpheus in Gluck's mythical opera of love and loss.

Following acclaimed performances at the Teatro Real in Madrid, Juan Diego Flórez records his first major opera role outside the bel canto repertoire, as he stars as Orphée in Gluck's most enduringly popular opera, sung in the original French of his 1774 Paris version.

The opera tells of the poet and musician Orphée who travels to the underworld in search of his wife Eurydice, on the understanding that he doesn't look at her until they are back on earth. When she misinterprets his distance, he is compelled to turn and face her, only to see her die a second time. Moved by the intensity of Orphee's devotion, L'Amour returns Eurydice to life once more as all ends happily.

Twelve years after the Vienna premiere of his original Italian version, Gluck adapted his opera for Parisian audiences. Apart from the change of language, the most significant difference is that the central role, sung in the Italian version by a castrato, was rewritten for the particular kind of high tenor voice that French audiences adored.

Flórez's rapid vibrato and sweetness give the impression of gliding brightly above the music. His is an elegant, aloof Orpheus...Alessandra Marianelli's Amour is sparkling

Needless to say, the quality of Florez's singing never falters for a second...From the opening scene he sings the most aristocratic of legato lines, which are a constant source of pleasure...The rest of the cast do not let him down. Ainhoa Garmendia makes a warmly sympathetic Eurydice, Alessandra Marianelli is a gleaming L'Amour.

Florez demonstrates that the music sounds thrillingly effective in this stirring upward transposition. He sings with power, lyrical elan and a wide range of dynamic...Lopez-Cobos conducts throughout with sensitivity and spirit

one of the very best things [Flórez has] done - his trademark agility is as breathtaking as ever in the florid 'L'espoir renaît dans mon âme', but the role also gives him opportunity to demonstrate a pathos and eloquence that's not often called for in his usual repertoire.

It's one of [Flórez's] finest performances, sung with noble beauty...Dramatically, it takes him into new territory, revealing a genuinely tragic sensibility on the part of an artist we associate primarily with virtuosity and charm.

Jesús López-Cobos conducts with great spirit, and the Teatro Real orchestra, woodwinds especially, feast on Gluck’s graceful ballet music, an enlarged feature of this Paris version. When he turns down the dazzle, Flórez himself in selected phrases becomes a tender pleasure.