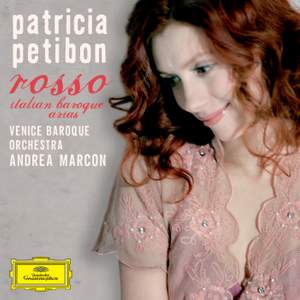 Patricia Petibon, admired for her command of Baroque style, records her first album of Italian Baroque arias partnered by Andrea Marcon and the Venice Baroque Orchestra

Saluted by the International Record Review for her “rare ability to inject into her performance vocal characterizations which . . . nullify the need to see these operatic characters in the flesh,” Rosso frames Petibon’s gift of transformation by purely vocal means

Petibon’s keen interpretive intelligence and gleaming tone summon into vivid life a wealth of characters tangled up in the power plays of gods, kings, witches, and devils

This enterprisingly planned recital confirms Patricia Petibon as a singing actress with few peers in Baroque opera...it is hard to resist the mesmeric intensity of Petibon's singing...[Marcon's] expert period band matches Petibon all the way in acuity and dramatic flair.

plenty of character and vivacity

Her voice is absolutely extraordinary. The higher her register, the stronger her tone, pouring out in a molten flow of shining beauty...And it’s not just Petibon’s voice. It’s also the dramatic impulse running alongside, pulsing and throbbing in step with every expression of sorrow or revenge in the texts.