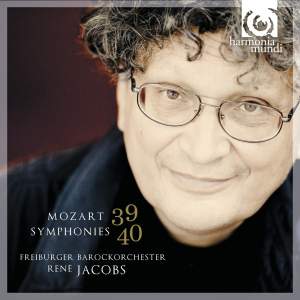 Surprisingly crisp and spry these readings may be, but the result sounds and feels authentically Mozartian, Jacobs coaxing alert and alive playing from a band on the very top of their form. — Michael Quinn, bbc.co.uk, 2nd August 2010 More…

After a decade immersed in the great Mozart Operas (to universal critical acclaim) René Jacobs returns to the late symphonies with his outstanding Freiburg Baroque. As with his previous recordings, his unique approach to these works from an operatic perspective brings new life to these scores, particularly in terms of phrasing and the clarity of texture.

In his own words: "A lot of people think period instrument performance means everything fast. I stick very much to the drama and the delivery of speech. I know that, say, Mozart's own tempi were faster than what is now usual, but, on the other hand, there are also moments when time must stand still."

“There is simply one word for Jacobs’ musical direction – enchanting.” The Independent

“Mr. Jacobs, more than anyone else, blows away the prim domesticity of our classical music world, and shows us past centuries as they really might have been.” The Wall Street Journal

“René Jacobs’s Mozart opera series [is] one of the recorded marvels of our time” James Jolly, Gramophone, February 2009

Surprisingly crisp and spry these readings may be, but the result sounds and feels authentically Mozartian, Jacobs coaxing alert and alive playing from a band on the very top of their form.

...deep understanding, individual interpretations, vivacious performances and, for the most part, a playful approach to this music. What you also hear is a particular sensitivity to the exquisite layering of Mozart's scoring...a recording that is though-provoking and always compelling.

Two of Mozart’s great symphonies of 1788 are coupled here in performances that radiate René Jacobs’s characteristically effervescent spirit without compromising the seriousness of discourse...The result is a disc of unalloyed freshness, in which the Freiburg players share Jacobs’s joy in music-making.