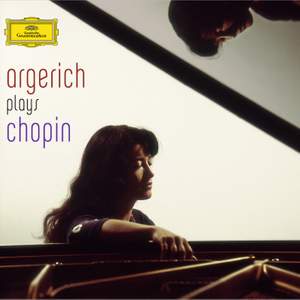 She was only 18 at the time, yet this belongs with other great interpretations for its mixture of poetry and virtuosity. At once shy and passionate, the performance is atmospheric in clean mono... — BBC Music Magazine, July 2010, 5 out of 5 stars More…

“Not only one of the most talented virtuosi of her generation, she can do what at most only a dozen pianists in the world are capable of.” Joachim Kaiser (Süddeutsche Zeitung, 1967)

Taken from radio recordings made in Berlin and Cologne in 1959 and (mainly) 1967, here is over an hour of newly-discovered Martha Argerich solo recordings of Chopin, all released for the first time and including works otherwise not recorded by her (Ballade no. 1, Mazurkas opp. 24/2, 33 /2,41/1&2, C# minor Etude).

From her epic First Ballade to the overpowering live Third Sonata — with exquisite performances of Mazurkas and Nocturnes in between — the recital demonstrates what a force of nature she already was in her first decade on the international music scene — “a veritable powerhouse of the emotions”, as Jürgen Otten writes in his liner notes.

She was only 18 at the time, yet this belongs with other great interpretations for its mixture of poetry and virtuosity. At once shy and passionate, the performance is atmospheric in clean mono sound...Essential listening for anyone interested in Argerich, Chopin, or indeed the art of the piano.

it captures the Argentine workhorse at her most powerful and alluring...Argerich, clearly focused, coaxes incredible narrative-led performances from these works...Exhausting, truthful and invigorating.

Of the playing here, I shall just say it's no wonder she won the Chopin Competition. Likewise in the three Mazurkas Op. 59...she captures their intimacy and lightning changes of mood to perfection....In the [concerto's] finale (for once truly agitato) she sweeps all before her with breathless exhilaration.

Most notable of them all is a performance of the First Ballade, from 1959, when Argerich was 18, full of youthful fire and astonishing technical brilliance, while an account of the C sharp minor Etude, Op 10 No 4 from 1967 is equally dazzling.

...imbued with a youthful energy, particularly the dazzling, industrious Etude in C sharp minor which seems to encompass entire worlds within two minutes...a bravura display of technique in the service of emotion.