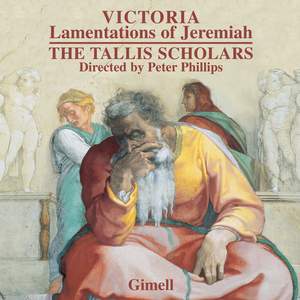 The Tallis Scholars produce luminous, free-flowing accounts [which] have a plangent beauty, characterised by the lucent sound and faultless intonation that have been the defining strengths of... — BBC Music Magazine, April 2010, 5 out of 5 stars More…

Victoria’s nine Lamentations contain some of his most intense, mystical and moving music and rank alongside the Requiem as one of his greatest achievements. This is The Tallis Scholars’ 50th album for Gimell and marks the 30th Anniversary of the first Gimell recording sessions in March 1980.

“ Michelangelo, when asked how best to please a Spanish patron, replied ‘show much blood and nails’. These Lamentations capture this rawness with Victoria’s own unique expressivity. If you have been moved by the Victoria Requiem then these Lamentations are for you.” Peter Phillips

The Tallis Scholars produce luminous, free-flowing accounts [which] have a plangent beauty, characterised by the lucent sound and faultless intonation that have been the defining strengths of this choir during the last four decades.

the performances are as impeccable as you would expect, without being bloodless. From the New World, the Padilla makes a worthy bonus.

This release, celebrating the 30th anniversary of the Tallis Scholars, is also the group’s 50th recording for its own Gimell label. These landmarks amply justify the idealism of the group’s founder and director...Victoria’s Lamentations of Jeremiah is suitably great music for such an occasion

powerfully intense and desolate...the balance is perfect and the recording (in Merton College chapel) is glorious.

Peter Phillips’s veteran group field a blended tone of astonishing purity, with no notes fussily manicured or stamped out by a machine. There’s bliss in hearing them sing the four syllables of the word “Jerusalem”...Harmonies, too, keep bewitching the ear.