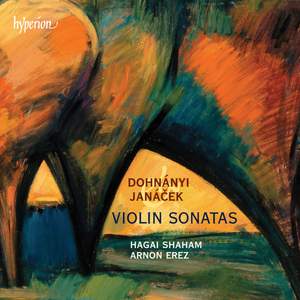 Ruralia Hungarica draws the most compelling performance, Shaham negotiating the challenging violin pyrotechnics of the outer movements with powerhouse playing as well as delivering a wonderfully... — BBC Music Magazine, May 2010, 5 out of 5 stars More…

Janáček: Dumka for violin and piano

Hagai Shaham and Arnon Erez have been enthusiastically acclaimed for their dazzling duo performances: their infectiously relaxed bravado and continual flexibility belying their impeccable ensemble. For their latest disc they turn to two composers who are seminal figures in the development of Eastern European music during the early twentieth century.

Dohnányi was one of the pivotal figures in Hungary’s musical life. He composed a number of significant pieces for the violin, including two violin concertos; his most important chamber work for violin and piano is the Violin Sonata in C sharp minor Op 21, composed in 1912. Dohnányi was by then thirty-five years of age, and the Sonata is a fully mature work showing his individual development of stylistic traits of Brahms and Liszt combined with a structural economy which reflects the close study of Brahms’s sonatas. Also recorded here is Dohnányi’s most overtly folk-influenced work, Ruralia hungarica, and a movement from his First Orchestral Suite, in F sharp minor Op 19, Romanza, arranged as a thoroughly idiomatic piece for violin and piano by Jascha Heifetz.

In the first days of World War I Dohnányi’s native Hungary was invaded by the Russian army, which seemed for a time to herald the end of Austrian dominance in the region. This portentous event provided the creative spark for Leoš Janácek’s Violin Sonata (his only surviving violin sonata; two very early ones he composed in Dresden and Vienna in 1880 are lost), at least according to Janácek himself. Other works by Janácek heard in this recital include early pieces from his student years, and an arrangement of the delicate mood study ‘A blown-away Leaf’ from the celebrated piano work On the Overgrown Path.

Shaham is in his element [in the Ruralia hungarica pieces] - the brilliant final piece carefree and dashing in style, the preceding, improvisatory Andante rubato alla zingaresca graceful and stylish...these are all appealing, finely-judged performances.