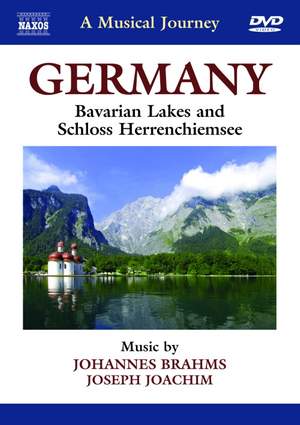 Bavaria has a place of its own in Germany, both geographically and culturally. The tour stars with the Alpine lake known as Königssee and explores the surrounding landscape, including the Berchtesgaden National Park and the gardens of Ludwig II's answer to Versailles, his grandiose Schloss Herrenchiemsee. The tour ends with the Chiemsee, its islands and its tranquil waters.

The music for the tour is by Johannes Brahms and his colleague and collaborator, the violinist Joseph Joachim. Brahms' Second Symphony, which accompanies the earlier parts of the tour, was described by some contemporaries as Brahms' Pastoral Symphony and provides, in its generally cheerful serenity, an apt accompaniment to views of the Bavarian countryside. Joachim's Overture In memoriam Heinrich von Kleist, written probably in the same year as Brahms' symphony, 1877, commemorates the centenary of the birth of the great German writer.