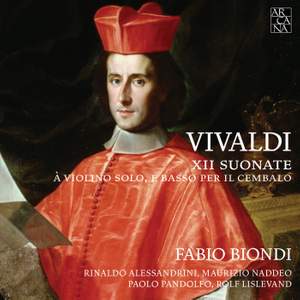 ...these Sonatas are pleasingly varied and of a generally high level of musical interest...[Biondi] is an imaginative interpreter — BBC Music Magazine, July 2010,

Discovered by Michael Talbot in 1973, the 12 sonatas of the Manchester manuscript are generally considered the high point of the composer’s chamber music. In his liner notes, Michael Talbot reckons that Vivaldi assembled them to present to Cardinal Ottoboni, the great Roman patron of the arts (portrayed by Francesco Trevisani on the front cover), on the occasion of the cardinal’s visit to Venice, his birthplace, in 1726.

They are performed here by Fabio Biondi, one of the most authoritative Vivaldi performers, accompanied by an all-star continuo group: Rinaldo Alessandrini, Rolf Lislevand, Paolo Pandolfo and Maurizio Naddeo. Long overdue for re-release, this milestone of the Arcana catalogue returns with new artwork, new digipack presentation and new barcode. Born in Palermo, Fabio Biondi began his international career at the age of 12, performing his first solo concert with the RAI Symphony Orchestra. When he was 16, he was invited by the Musikverein to perform Bach’s violin concertos. Since then, Biondi has performed with ensembles including Cappella Real, Musica Antiqua Wien, Seminario Musicale, La Chapelle Royale and Les Musiciens du Louvre, all specialising in the performance of baroque music using original technique and instruments. In 1990, he founded Europa Galante, an ensemble which, in just a few years thanks to their worldwide concert schedule and extraordinary recording successes, became the most internationally renowned and awarded Italian ensemble of baroque music at that time.

...these Sonatas are pleasingly varied and of a generally high level of musical interest...[Biondi] is an imaginative interpreter