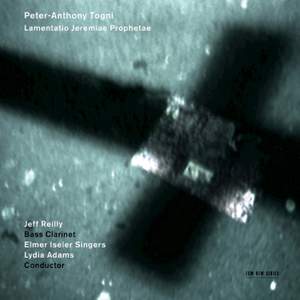 A compelling concerto for bass clarinet and choir a cappella, Lamentatio Jeremiae Prophetae is contemporary music that juxtaposes improvisational expressiveness and choral grandeur, jazz sensibilities and modern composition. There are fiery and energetic performances from an outstanding reed virtuoso employing extended techniques and from one of Canada’s foremost chamber choirs, the Elmer Iseler Singers conducted by Lydia Adams.

Lamentatio Jeremiae Prophetae by 50-year-old Canadian composer Peter-Anthony Togni is a 55-minute setting of The Old Testament prophet’s lamentations for solo bass clarinet, mixed choir a cappella and solo soprano. The piece was commissioned from the Canada Council for the Arts as part of its 50th anniversary celebrations and was given its premiere in 2007 by the performers heard on this CD. Togni’s idea originated in a request from bass clarinettist Jeff Reilly for a concerto in which dramatic narrative events would be enacted through the soloist’s improvisations. In fact, the piece which, according to the composer, “is a direct expression of my Roman Catholic faith” conveys the story of Jeremiah’s prophesies of the impending destruction of Jerusalem from the hands of the Babylonians with the choir providing the crowd scenes and the bass clarinet as the voice of Jeremiah. Peter-Anthony Togni studied organ and composition in his native Canada and at the Schola Catorum in Paris. He is a co-founder of the group ‘Sanctuary’, an improvisation-based trio of bass clarinet, organ and cello and has received numerous commissions in various genres. Bass clarinet virtuoso Jeff Reilly has considerably expanded the technical range of his instrument; he has played, among others, with musicians such as Jerry Granelli and the duo of bassist Barry Guy and violinist Maya Homburger.