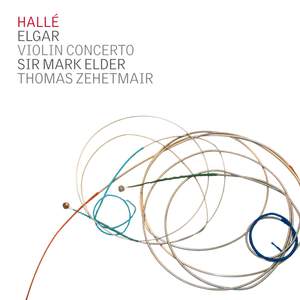 Zehetmair...is able to marry impassioned purpose with appreciation of Elgar's complexity...Mark Elder's direction is stunning...there's a warm glow about the Hallé sound that adds an extra strand... — BBC Music Magazine, May 2010, 5 out of 5 stars More…

Following success in the 2009 Classic FM Gramophone Awards the Hallé and Sir Mark Elder return to the music of Elgar, coupling the much loved Violin Concerto with the Prelude to the lesser known oratorio The Kingdom and Elgar’s own arrangement of highlights from The Dream of Gerontius.

A stunning new interpretation of Elgar’s masterpiece from one of the world’s most dynamic violinists. The performance is alive with passion and dynamism, yet imbued with the beautiful poetry for which Elder’s interpretations of Elgar have been acclaimed.

Part of a planned trilogy of oratorios about the Apostles (which he never completed) was written in 1905 when Elgar underwent some spiritual crisis which shook his religious faith and he was also physically unwell. The music leaves an impression of lyrical tenderness and deep sadness.

Elgar responded to demands, particularly from the conductor Henry Wood, for extracts from Gerontius which could be performed as concert pieces, in the manner of Wagner’s Prelude and Liebestod from Elgar’s solemn and elevating Prelude was an obvious choice for this treatment and, like Wagner, he then went to the end of the work and the point at which Gerontius’s guardian angel (mezzo-soprano) sings seraphically of how she will accompany him "o'er the penal waters" of Purgatory, bearing him “softly and gently” in her arms. When he worked on this arrangement at the end of 1900, Elgar removed the chorus lines and made the vocal part optional and he conducted it for orchestra only at Bradford on 16 February 1901. Four days later Wood conducted the first London performance (the first music by Elgar that he conducted) but included the vocal part, as on this recording.

Thomas Zehetmair is one of the most significant violinists of his generation. He enjoys a successful international career thrilling audiences and critics with his abilities as a soloist, chamber musician and conductor and has been the recipient of many international recording awards.

“…[the Hallé’s] form under Mark Elder is rock solid, splendiferous in ensemble and tone; I’d rather listen to them play English music than any other orchestra in the world.” The Times

“a towering performance of Elgar’s Violin Concerto with Thomas Zehetmair, a soloist of fierce intelligence. Unlocking the work’s volcanic emotions …he certainly found the reflective tenderness. He and Elder’s taut yet flexible orchestra were at one in the visionary poetry of the finale, making this a performance of exceptional detail – happily one that will appear on the orchestra’s own CD label.” The Sunday Telegraph

Zehetmair...is able to marry impassioned purpose with appreciation of Elgar's complexity...Mark Elder's direction is stunning...there's a warm glow about the Hallé sound that adds an extra strand of specialness.

...this latest version blows the others...out of the water..Zehetmair's reading is one of greater intimacy, whilst its intensity holds you in an iron grip from first note to last...In the slow movement Zehetmair and Elder are quietly moving, with the kind of unhistrionic approach that allows the music's latent beauty to flower

Zehetmair and Elder scrupulously observe Elgar’s copious expression marks, the soloist’s expansive phrasing enhanced by judicious portamento and exquisite filigree decoration. Elder’s understanding of tempo variegation in this music is now second nature to him...he shows again that he and the Hallé have few rivals in this music.

...[an] exceptional recording of the work, Zehetmair's playing is...passionate and openly expressive.

This is a fascinating document for Elgar-lovers, but Little's performance, wistful, poetic and powerful, with sympathetic accompaniment from Davis and the RSNO, demands attention in its own right.