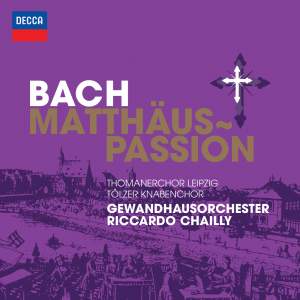 There is some accomplished solo singing, and the part of Christ is taken with...intensity by Hanno Müller-Brachmann...Thomas Quasthoff has a lovely presence — BBC Music Magazine, June 2010, More…

No.25 Choral: "Was mein Gott will, das g'scheh allzeit"

The great orchestra of Bach's own city of Leipzig in a glorious new recording of his choral masterpiece.

The choir parts are thrillingly sung by two of Germany's most celebrated boys' choirs - the Thomanerchor Leipzig and the Tölzer Knabenchor.

Part of a trio of Bach releases that also includes the Brandenburg Concertos (January 2010) and Christmas Oratorio (November 2010).

There is some accomplished solo singing, and the part of Christ is taken with...intensity by Hanno Müller-Brachmann...Thomas Quasthoff has a lovely presence

very recommendable indeed. The balance is excellent, as is immediately shown in the opening double chorus...and there is an ideally wide range of dynamics between soloists and chorus, so the effect is very real, with a fine bloom on the solo voices...Chailly's pacing is freshly resilient and the refined orchestal playing often has the lightest touch.

Chailly has assimilated a historically informed performing style, but his interpretation bristles with drama, thanks to the gripping narrative of his Evangelist, Johannes Chum...Yet it is the contribution of the two choirs, and Chailly’s devoted conducting, that make the issue special

Here’s Bach’s great Easter Passion straight from Bach’s heartland, Leipzig, with the Leipzig Gewandhaus Orchestra, St Thomas’s Boys Choir, and an ease of delivery that can come only when you breathe in the composer every day. Conducting, Chailly lets the music speak.

The Independent on Sunday 19th December 2010

The Leipzig Gewandhausorchester's brilliant sound dances in Riccardo Chailly's jubilant recording of Bach's Christmas Oratorio. The choral singing is lithe from the Dresdner Kammerchor. Bass Konstantin Wolff leads a well-balanced and characterful quintet of vocal soloists, with soprano Carolyn Sampson sounding peach-sweet in her arias...A joy from start to finish.

The Independent on Sunday 4th April 2010

Riccardo Chailly's new recording nods to the weight of tradition yet the purposeful, rosy, Victorian bloom of his orchestra is lightly applied. Tempi are fleet, lilting; the attack of the local boys' choirs sharp and delicate; the voices of the soloists cool and direct.