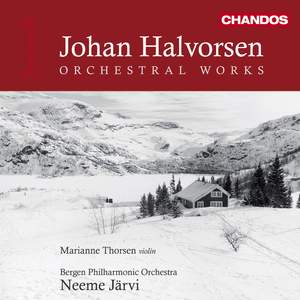 Järvi has Beecham's gift in making the merely worthy sound exceptional and so it proves with the symphony, written for Halvorsen's own pleasure...The performances throughout are top-notch and... — Gramophone Magazine, August 2010 More…

La melancolie (after In Moments of Solitude by O.B. Bull)

Neeme Jarvi conducts the Bergen Philharmonic Orchestra in the launch of a revealing orchestral series; the works of Johan Halvorsen.

Volume one of this four volume series, features a mixture of well-known works with rarely recorded repertoire. The Entry March of the Boyars is recurrently in the concert repertoire and is programmed with the only available recordings of Andante Religioso, Mascarade Suite and La Melancholie, along with the rarely recorded Symphony No.1.

Halvorsen’s music is one of the best kept secrets of Norway; he was not only an accomplished violinist and conductor, (he was in fact conductor of Bergen Philharmonic in 1885-1886) he was also among the most prominent Norwegian composers in the generation following Edvard Grieg. His compositions develop the national Romantic tradition of his friends Grieg and Svendsen, but his was a distinctive style marked by brilliant orchestration inspired by the French Romantic composers.

This extremely attractive music makes a welcome addition to the catalogue and reflects particular Bergen Philharmonic strengths, the warm tonal richness of the orchestra’s strings, and individual excellence of its principal players among them.

The Bergen Philharmonic made its BBC Proms debut in 2007. Critical plaudits and public acclaim underlined the quality of an ensemble with long roots and a bright future.

Järvi has Beecham's gift in making the merely worthy sound exceptional and so it proves with the symphony, written for Halvorsen's own pleasure...The performances throughout are top-notch and Chandos's sound is of demonstration quality.