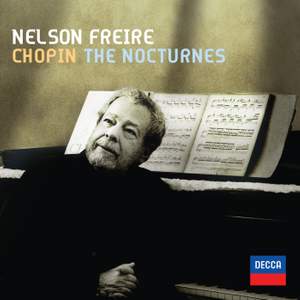 For Freire the Nocturnes are tirelessly experimental, an opalescent world of shifting moods and colours...True, there are moments when a once legendary and impeccable technique stiffens [...],... — Gramophone Magazine, May 2010 More…

In celebration of Chopin Year – 2010 being the 200th birthday of the sui generis Polish genius – Nelson Freire, a Chopin interpreter of unique discernment, records the beloved Nocturnes 1-20

Nelson Freire is an acknowledged master of the keyboard. His recordings for Decca have won numerous awards, including a Gramophone Award, Diapason d’or, Grand Prix de l’Académie Charles Cros, and Choc du Monde de la musique. Freire is a past winner of the Dinu Lipatti Medal, first prize winner of the International Vianna da Motta Competition and was France’s Victoires de la Musique’s “Soloist of the Year” in 2002

A pianist’s pianist whose playing “sings” with every refinement of the school of bel canto, Nelson Freire is an artist whose profile deserves the attention of a wider classical market

In the opinion of The Dallas Morning News, “Any new Freire recording is virtually self-recommending.” To be launched in March, Freire’s is a key release of the Deutsche Grammophon/Decca Chopin campaign

For Freire the Nocturnes are tirelessly experimental, an opalescent world of shifting moods and colours...True, there are moments when a once legendary and impeccable technique stiffens [...], yet this is less than marginal in music-making so personal and reflective

“Suppleness before everything,” Chopin used to tell his students. Freire does his best to follow suit, often varying quickenings and hesitations with a magician’s touch...A level of poetic enchantment...takes this music of sweet dreams and agitated melancholy through the night to victory