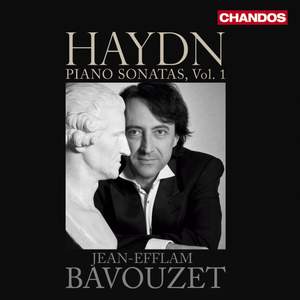 nothing, either in expression or tone, is ever forced. It helps that [Bavouzet's] modern grand (maker unspecified) has a relatively crisp lower register, and that the recorded sound rightly achieves... — BBC Music Magazine, April 2010, 4 out of 5 stars More…

Jean-Efflam Bavouzet’s complete Debussy cycle has proven to be a real winner with the critics and the record buying public. He now embarks on the Haydn Piano Sonatas, and confirms that he should in no way be pigeon-holed in French repertoire.

Few leading pianists have recorded these virtuosic Classical sonatas but Maestro Bavouzet felt he had something new to contribute. He plays a Yamaha grand, imported from France which he felt best suited the timbre that he wanted to achieve.

The programme for Volume 1 contains the experimental and ambitious Sonata in A flat major, No.31; the elegantly virtuosic Sonata in D major, No.39l, expressive Sonata in B minor, No.47 and the almost Schubertian Sonatas in C sharp minor, No.49. Volume Two will be released this autumn.

Bavouzet launches this new series with the support of a number of concerts across Europe.

nothing, either in expression or tone, is ever forced. It helps that [Bavouzet's] modern grand (maker unspecified) has a relatively crisp lower register, and that the recorded sound rightly achieves spaciousness and intimacy...a wonderfully promising series.

This beautifully recorded disc promises well for another classic Bavouzet set to complement his Debussy recordings.

Clarity of line is paramount in this music and that is what Bavouzet delivers: he views the sonatas with sobriety but by no means dispassionately...Discreet ornamentation adds allure to music that offers both majesty and sweetness, and ranges from the grand gesture to Haydn's trademark high jinks

The scherzando middle movement of the C sharp minor sonata (No 49) made me want to dance around the room to Bavouzet’s joyous playing. Unadulterated bliss.

however extensive his survey turns out to be, the results should be well worth hearing...Though he exploits all the tonal possibilities of the modern concert grand, Bavouzet also makes full use of the latest ideas on performance practice...It's the best kind of historically alert piano playing.

The French pianist renowned for Debussy has now turned his attention to Haydn, and the results are effervescent and dazzling

[Haydn's sonatas] still have a Baroque feel which Bavouzet doesn’t seek to play down, and he conveys Haydn’s impish spirit with the utmost clarity.

This first release in a long-term series offers four sonatas, dispatched with scintillating brightness and many ornamental trills...It’s impossible not to be impressed...by the panache of No 39 in D or the grand carnival of the relatively lengthy No 31 in A-flat.