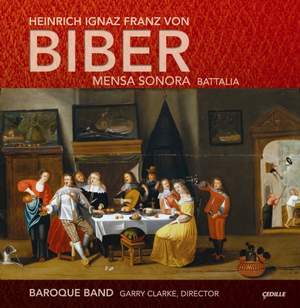 Chicago’s “stylish and exciting period-instrument group” (Chicago Tribune), Baroque Band presents works by the Bohemian-Austrian composer Heinrich Ignaz Franz von Biber, “the most important Baroque composer before Bach” according to Paul Hindemith, and unquestionably one of the most innovative and influential composers of the second half of the seventeenth century.

Biber’s Mensa Sonora (meaning “Harmonious Table”) was music composed for aristocratic dining, though it is anything but superficial background music. The disc closes with the 10-part Battalia for strings, which uses several unique devices for the time: hitting the strings with the wood of the bow, placing paper on the strings of the basses to imitate a snare drum, snap pizzicatos (à la Bartók!), and folk songs rendered simultaneously in eight different keys to portray drunken soldiers.

Early music specialist Garry Clarke, hailed by the Oxford Times as “one of the finest exponents of baroque music in the [UK],” leads Baroque Band through the feats of virtuosity necessary to execute these exciting pieces. His Baroque pedigree (Academy of Ancient Music, The Sixteen, Orchestra of the Age of Enlightenment, The King’s Consort, The Hanover Band, and the Scholars; plus work with Christopher Hogwood, John Elliot Gardener, and William Christie) led him to found and develop an ensemble with “an abundance of style, a crisp esprit de corps, and a palpable affection for its repertoire.” (Chicago Tribune)