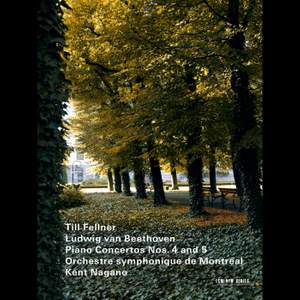 These are superlative performances of these extremely familiar works...The give and take between Fellner and the Montreal Symphony Orchestra is uncanny, in that they seem to be questioning or... — BBC Music Magazine, May 2010, 5 out of 5 stars More…

Austrian pianist Till Fellner, whose two Bach albums on ECM have won him unanimous international acclaim, teams up with conductor Kent Nagano and his Orchestre Symphonie de Montréal for a sensitive and meticulous interpretation of Beethoven’s much-loved Piano Concertos Nos. 4 and 5.

In a review of the recording to be published in the March issue of ‘Fanfare’ Jerry Dubins speaks of “a stunning achievement” and points out that “the recording has a fullness, depth, and solidity to it that are equal to the very best modern technology has to offer.” Fellner and Nagano, musical collaborators for more than a decade, share a delicate and sensitive approach to Beethoven’s middle period that, by eschewing all demonstrativeness, focuses on natural tempi, transparent sound and maximum clarity of articulation. While Fellner continues his muchlauded cycle of Beethoven’s 32 Piano Sonatas on major concert platforms in Europe (including London’s Wigmore Hall), the US and Japan, Nagano and his Montreal orchestra have received much attention with their Beethoven project “Ideals of the French Revolution”.

These are superlative performances of these extremely familiar works...The give and take between Fellner and the Montreal Symphony Orchestra is uncanny, in that they seem to be questioning or replying to one another as if only two individuals were concerned.

This is a dream partnership with soloist and conductor working hand-in-glove...you will rarely hear playing of such an enviable, unimpeded musical grace and fluency....Fellner's and Nagano's ease and naturalness always allow Beethoven his own voice.

Till Fellner’s stature in the Viennese classical repertoire has always been distinguished by his poise, discretion, intellectual concentration and focused energy, facets that emanate from this coupling of Beethoven’s Fourth and Fifth piano concertos.