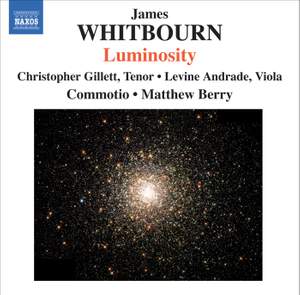 and other choral works

The music itself proves striking enough in this glowingly committed performance by the Oxford chamber choir Commotio...superbly sympathetic. — BBC Music Magazine, May 2010, 5 out of 5 stars More…

Whitbourn: A Prayer of Desmond Tutu

Whitbourn: He carried me away in the spirit

Whitbourn: Of one that is so fair and bright

Annelies: There is no speech or language

I. Lux in tenebris

VII. All Shall be Well

Best known for his inspired Son of God Mass for saxophone, choir and organ, the British composer, conductor and writer James Whitbourn is admired for his fresh, distinctive yet accessible compositional voice.

Setting texts from ancient seers to the modern luminary Desmond Tutu (who himself features on the disc), the works on his new recording reflect the breadth of the composer’s achievement, from the monumental Magnificat written for King’s College Cambridge, to the Classical Indian fusion work Luminosity – a rare choral work composed for dance.

They are performed by Commotio, an Oxford-based chamber choir which specialises in contemporary choral repertoire.

“A highly impressive [CD] debut ... The choir has ...masterly technical control and precision of pitching, and a pleasing uniformity of tone across its full dynamic range. One of its most impressive attributes, however, is the extraordinary clarity of its diction.” International Record Review on a previous disc

"The choir has … a reputation for the quality of its performances, which invariably combine vocal purity, technical expertise and a deep sense of commitment." Classical Music, December 2005

The music itself proves striking enough in this glowingly committed performance by the Oxford chamber choir Commotio...superbly sympathetic.

Luminosity...glows with hypnotic brilliance, fusing powerful vocal writing with seductive eastern influences, while his Evening Canticles for King's and his setting of a prayer by Desmond Tutu illustrate the boundless breadth of Whitbourn's choral imagination.