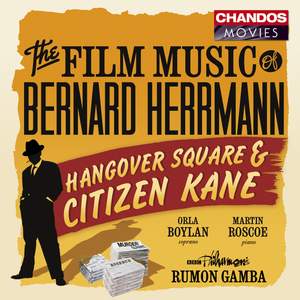 the Concerto Macabre, Herrmann's concert version of the lethal concerto from Hangover Square, [is] thrillingly done with the electrifying soloist Martin Roscoe. — The Guardian, 8th April 2010, 3 out of 5 stars

The Dealer - Murder and Fire - Confession

Netta - The Spell - The Murder - Fame

Brilliant as both a conductor and composer, Bernard Herrmann is arguably the most innovative film composer of the 1940s, ‘50s and ‘60s. He provided background music for 47 feature films released between 1941 and 1976, including such cinema classics as Citizen Kane, Psycho, and Taxi Driver and is especially recognised for his work with Alfred Hitchcock.

Herrmann rejected the term ‘film composer’; rather, he thought of himself as a composer who worked on films. He admired Vaughan Williams, Walton and Prokofiev who were able to compose great works for films as well as for the concert hall. These musical influences resulted in his own scores challenging the way film scores were viewed, taking them from a late addition to an art.

Often cited as the greatest movie ever made, Citizen Kane was Herrmann’s first film score. Much has been made of Orson Welle’s influence over cinema history but Bernard Herrmann’s score plays no small part in the film’s incredible success and earned him a nomination for Academy Award for best dramatic score. Film noir, Hangover Square is based on Patrick Hamilton’s novel of the same name. This dark movie has a similarly dark score that was influenced by Richard Addinsell’s success with ‘Warsaw Concerto’. The final scene sees the character, Bone mesmerizingly playing his great piano concerto, as flames consume all around him. Stephen Sondheim has referred to Herrmann’s score as a major influence on his musical Sweeney Todd.

Bernard Herrmann sits perfectly amongst the Chandos Movies series, conducted by Rumon Gamba and is sure to be a must for nostalgic film music lovers.

the Concerto Macabre, Herrmann's concert version of the lethal concerto from Hangover Square, [is] thrillingly done with the electrifying soloist Martin Roscoe.