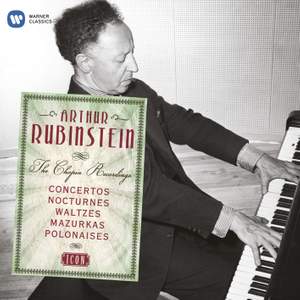 Arthur Rubinstein was born on January 28, 1887 to a businessman in Lódz. He was the youngest of 8 children in a family which was part of the large Jewish community in the city.

His love of the piano showed itself when, aged two, he showed immense interest in his elder sister’s lessons. He studied in Warsaw and at the age of four he played for the great violinist, Joachim, who was so impressed that he made plans for the boy’s musical development.

At the age of 10 he moved to Berlin and three years later he made his debut with the Berlin Philharmonic Orchestra and visited other cities in Germany and Poland. At 17 he moved to Paris which, being the centre for so much music, was the best place to launch a career particularly one which involved playing the music of his fellow countryman, Chopin. He met Ravel, Dukas and Szymanowski, played Saint-Saëns’ Piano Concerto No. 2 and was soon recognised as a major musical figure with enormous potential. Two years later he made his Carnegie Hall debut and then toured but, contrary to all his plans, he was not well received in the USA.

He returned to Europe for tours of Italy, Russia, Austria and Germany. It was not until 1912 that he made his debut in London and found a residence in Chelsea which was a good base from which to perform concerts and go on tours. He stayed in London during WW1, playing recitals and giving concerts with the renowned Belgian violinist, Ysaÿe. In 1916 and 1917 he toured Spain and South America where he developed his great love of the music of Albeniz, Granados, Falla and Villa-Lobos.

In 1921 he again visited the USA, this time with two Polish friends, Kochanski, who made some brilliant arrangements for violin and piano of Spanish music, and Szymanowski. He married in 1932 and the same year he withdrew from concert life for several months to develop his technique and repertoire. His house in Paris was looted by the Nazis in WW2 and his career moved across the Atlantic where he was now accepted as the genius all Europe knew. His agent always spelt his name Artur – in order to maintain the mystique of being “foreign”? (Rubinstein always referred to himself as Arthur when in English-speaking countries) – and he became an American citizen in 1946.

His discography is large but over half of it is dedicated to the works of Chopin and it is with this composer he is most associated although Brahms and the Spanish composers often featured. He is widely considered as one of the greatest pianists of the twentieth century in both solo and concerto work but also in chamber music with such greats as Heifetz, Piatigorsky and Szeryng.

His career started to fail with his eyesight in the mid-1970s and he retired following a concert in his beloved Wigmore Hall in but May 1976 where he had first played nearly 70 years before. He was made an honorary Knight of the British Empire in 1977. Although had refused to teach when younger he did accept pupils late in life and he also gave masterclasses.

He died in Geneva on 20 December 1982 at the age of 95. A year after his death his cremated remains were buried in Jerusalem. Israel holds a Piano Master competition in his honour every three years.