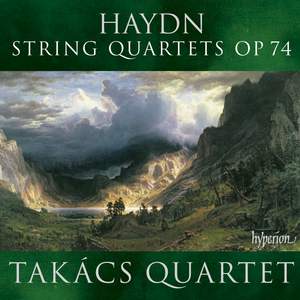 the Quartet retains much of its 'pre-authentic' manner, with forceful rhythms, full-blooded phrasing, vibrato and a wide dynamic range...Just occasionally the Takacs seem more at home in Haydn's... — BBC Music Magazine, December 2011, 4 out of 5 stars More…

Recording of the Week,  Haydn from the Takács Quartet

For their fifth and sixth albums on Hyperion, the award-winning quartet tackle Haydn’s Opp. 71 and 74, recorded at Wyastone Estate Concert Hall in Monmouth, South Wales last November and showcasing their rich, rounded sounded and clarity of texture to great effect.

These quartets date from 1793 and were written when Haydn returned home to Vienna after a visit to London which had cemented his international fame as a composer and public figure.

The composer wrote a set of six string quartets for Count Anton Apponyi, a chamberlain at the Imperial Court. The set was broken up into two groups of three and sold to separate publishers, thus becoming the Op 71 and Op 74 Quartets, both released this month by the acclaimed Takács Quartet.

The quartets possess an orchestral sonority, and the frequent modulations, dynamic variations and increasingly virtuosic writing can be derived from elements of the six London Symphonies. They demonstrate the composer’s astonishing elegance, lyricism and his immense skill in fusing the profound with the light-hearted.

In these compelling interpretations the Takács Quartet display an absolute unanimity of tone and style and cement their reputation as one of today’s greatest string quartets.

the Quartet retains much of its 'pre-authentic' manner, with forceful rhythms, full-blooded phrasing, vibrato and a wide dynamic range...Just occasionally the Takacs seem more at home in Haydn's vivacious flights than in his more serene vein...though they unfold the Adagio cantabile of the Quartet in D major, Op. 71 No. 2 with an unhurried fullness and luminosity. Yet the main virtue is that these readings never sound mannered, but alive.

The outer movements of Op. 74 No. 1...show that Haydn had clearly constructed all his moments, and the Takacs don't stint on them. Or on the moments that are less obvious calls to attention - like No. 2 which, after an imposing eight-bar introduction, settles into what these musicians discern as a work of quieter subtleties, their excellent internal balancing allowing every note and expressive gesture to speak.

the sound captured here is rich and rounded, but with no shortage of clarity and detail. These details are what makes the difference in the faster and wittier movements, with bravura passagework for all instruments tossed off with real style and panache...passages where Edward Dusinberre’s first violin floats effortlessly above the lower trio are simply magical.

the Takacs play this ever-surprising music with their characteristic imagination, contrapuntal rigour, sensitivity to texture and colour, and, in the dizzying finales, wit. They are the epitome of Goethe’s four intelligent conversationalists, always fresh in their response to Haydn’s astonishing inventiveness.

From the perfect weighting of every chord, to buoyant rhythms, and a sense of effortless transparency, even in the fastest music, the Takács ensure that no details are missed, while always preserving the sense of musical whole. Extraordinary.

they make a tasty meal of everything, even something as seemingly innocuous as the two-chord gesture at the beginning of Op 74 No 1...The ensemble hasn’t forgotten its Hungarian roots, and there’s always extra flair and bite in their playing when Haydn’s inspiration leans towards folk music (the Op 74/1 finale, say). More important still for success are the musicians’ clarity of line and perfect balance, well reflected in Hyperion’s recording.